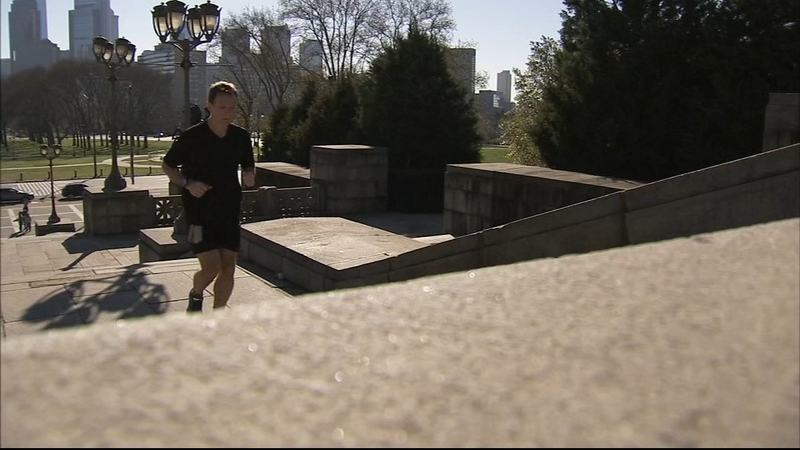 PHILADELPHIA (WPVI) -- Mark Gibson sets a high bar when it comes to physical challenges, dubbing his most recent the "Rocky Steps Everest Challenge."

"The big plan was to attempt to climb the height of Mount Everest on the famous 'Rocky' steps of Philadelphia, the art museum steps - so that's 29,029 feet," said Gibson.

To complete this challenge, it would take 880 trips.

Gibson says he started doing these types of challenges about 10 years ago when he turned 50.

And this challenge raised funds for Alex's Lemonade Stand to help them in their fight against childhood cancer.

Raising funds for a children's charity was important to Gibson since he has worked with kids for 35 years, coaching gymnastics. He is a former assistant coach to the U.S. Junior Olympic National Team.

And 18 years ago, Gibson and his wife, Donna, started the Boing Gymnastics Center in Perkasie, Bucks County. Gibson says their goal is "to give kids a foundation of confidence built on their physical abilities."

Now with the gymnastics center temporarily closed due to COVID-19, Gibson is adapting those coaching lessons for his motivational website, aptly named High Bar Performance.

"The program that I teach is CAT - and that is Curiosity, Audacity, Tenacity," said Gibson. "My job is to teach you how to be self motivated."

He says he wants to provide people with goals to inspire them so that they get excited, but they would do the work themselves.

And Gibson worked to complete this challenge with the support of his family. His daughter, Missy, joined him at times on the steps for what became an almost 48-hour challenge.

"I started off, slow run up and down the steps," explains Gibson. "And then that backed off to walking." Gibson says originally, he was aiming to complete the challenge in 24 hours, but actually it took double that amount of time.

He took breaks, but had trouble holding down food, so he slept the second night before finishing the final 200 laps.

Donna was there to witness her husband's triumphant finish.

"It's just such a great thing. He does inspire so many people," she said.

Gibson says if you are thinking of challenging yourself, "just pick something that is a little bit beyond what you know you can do and push yourself to try and achieve it."