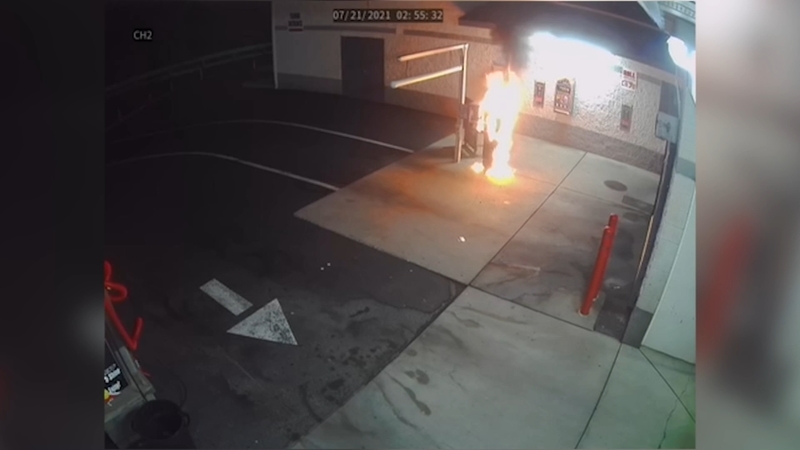 BENSALEM, Pennsylvania (WPVI) -- The Bensalem Police Department is searching for a blowtorch-wielding suspect who tried to break open a payment machine at a car wash Wednesday.

The incident happened at the Red Rhino Car Wash at 3511 Bristol Pike, and it was all caught on tape.

"This is a father and son owned business. We've been working hard to make this place perfect," said co-owner Brent McCurdy.

The suspect is seen on video pulling up to the property around 3 a.m. on Wednesday.

Police say the suspect's vehicle is a dark-colored Nissan sedan, possibly an Altima, with paint chipping off the hood, roof, and driver's side front door.

Next, he parked in the back and walked up to the payment machine, lit his blowtorch, and began attempting to break it open for cash inside.

McCurdy says there are three locks on this kind of machine, and the suspect was able to light the top one on fire.

Then, video shows the suspect trying to torch the second lock.

The suspect then seemed to realize his plan wasn't going to work and left, but the machine was still on fire.

About a minute later, it would go up in flames. The fire would begin melting part of the building's roof as well. Officials say the whole car wash building nearly burned down.

But incredibly, a good Samaritan came out of nowhere to save the day and put the fire out with an extinguisher.

"If this would have gone down, my heart would have been broken right now. We'd have lost the whole business. I need to find who they are," said McCurdy. "I heard they drive a huge dump truck, and because our entry is tall, he can wash here. When I find him, I'll be giving him a big hug."

McCurdy says the money inside the machine wasn't much and was burned during the incident.

But now, when the car wash isn't managed, customers can't use the 24-hour automatic service.

"Some of these customers might go and find a new place to wash," said McCurdy.

McCurdy hopes someone recognizes the suspect or his car and turns him in.

He also had a message for the suspect who nearly burned the Red Rhino down: "I wanna say get a job!"

If anyone has information surrounding this incident, contact the Bensalem police.