This weekend, thousands of flights were canceled or delayed as experts cited weather in Florida and other issues.
WPVI
By Alyana Gomez 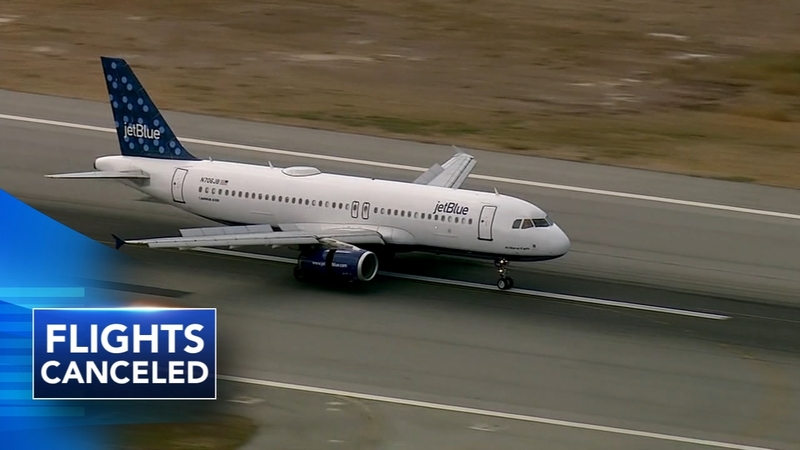 PHILADELPHIA (WPVI) -- Dozens of flights in and out of the Philadelphia International Airport were canceled or delayed Monday following days of ongoing issues.

This weekend, more than 3,500 U.S. flights were canceled and thousands more were delayed as experts cited weather in Florida and other issues.

FlightAware, a website that tracks flights, noted major disruptions at several Florida airports, including in Miami, Ft. Lauderdale, Tampa and Orlando, as well as Baltimore, New York and other airports around the country.

JetBlue, Southwest, Alaska Airlines, Frontier, Spirit and American Airlines were most affected, according to FlightAware, with JetBlue and Spirit canceling one-third of Sunday's scheduled flights.

A family in Philadelphia was looking to fly back to Atlanta on Monday, but their flight from Newark was canceled and the only flight they could get on was here in Philadelphia. So, that meant renting a car and driving two hours south.

"We had to find our own way to Philly, but they gave us a ticket. We had to pay for our own hotel room to come down here and catch a flight to be back home," said Tony Moore of Atlanta.

As of Monday evening, 61 flights had been delayed and 26 were canceled at PHL.

A group of students at West Deptford High School were planning to head to Disney World on Monday, but their dreams were dashed.

"We were all ready to go and I got the text and was really devastate," said Riley Axelrod.

After years of canceled high school events because of COVID, students said this was the last thing they expected.

"It kind of felt fitting for the way our high school is going. Like why would we get this?" said Leah Slesinski.

The spate of cancellations arrived as air travel is rebounding from the pandemic, with strong demand for spring-break flights. People on social media complained about waiting on hold or in lines for hours to get their canceled flights rescheduled and being stranded for days.

"Severe weather in the Southeast and multiple air traffic control delay programs have created significant impacts on the industry," a JetBlue spokesperson said in an email. "Today's cancellations will help us reset our operation and safely move our crews and aircraft back in to position."

Southwest Airlines also cited "weather and airspace congestion" Saturday in Florida, as well as a "technology issue." It canceled about 1,000 flights over the weekend but said that as of 1 p.m. Eastern, it had no more cancellations on Sunday.

American said Florida weather Saturday affected its operations, and it was recovering Monday.

Alaska Airlines seemed to be dealing with a separate issue. The airline said Sunday that weekend flight cancellations that began Friday have affected more than 37,000 customers and, further cancellations were possible. The airline declined to say why it canceled flights but referred in its statement to contract negotiations with its pilots. Off-duty pilots picketed in several U.S. cities Friday over stalled negotiations. They have been without a new contract for three years.

"Alaska Airlines failed to properly plan for increased travel demand and take the steps necessary to ensure it attracted and retained pilots," the pilots union said in a Friday press release.