The Philadelphia judge issued the ruling on the Christopher Columbus statue in a seven-page decision Tuesday.
WPVI
By 6abc Digital Staff and Bob Brooks 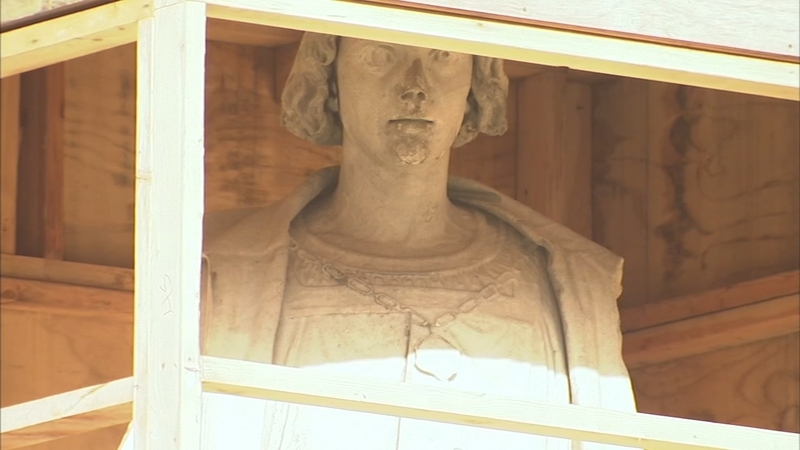 PHILADELPHIA (WPVI) -- A judge has ruled that a controversial Christopher Columbus statue can stay in South Philadelphia.

"It is baffling to this Court as to how the City of Philadelphia wants to remove the Statue without any legal basis. The City's entire argument and case is devoid of any legal foundation," said the judge in a seven-page decision on Tuesday.

The ruling overturns the decisions by the City of Philadelphia Board of License and Inspection Review and later the Philadelphia Historical Commission to remove the statute.

Judge rules against removal of Christopher Columbus statue : "It is baffling to this Court as to how the City of Philadelphia wants to remove the Statue without any legal basis. The City's entire argument and case is devoid of any legal foundation." @6abc pic.twitter.com/OJ6xJJKugV

Rich Cedrone, president of the Friends of Marconi Plaza, fought to keep the Columbus statue at Marconi Plaza.

"We still don't believe it stands for anything against any other culture. That's not our message," said Cedrone.

But it became a flashpoint last summer. Some in the city said Columbus and the statue is a symbol of hate and oppression. While others claimed the statue is an important part of Italian-American heritage and should be left alone.

As a result, the city decided to have it removed.

Judge Paula Patrick wrote the city's primary justification for the removal was the civil unrest following the murder of George Floyd.

But in doing so, she wrote it was inconsistent with code, never showed to the court ongoing civil unrest beyond last June and failed to allow for 90 days of public input.

George Bochetto, the attorney for the Friends of Marconi Plaza, said, "I don't like a mob to show up and all of a sudden they start dictating what public policy is."

He says the city made a knee-jerk reaction.

"Everybody is entitled to a protest, but mobs don't rule, processes rule," said Bochetto.

After the judge's ruling, a city spokesperson released a statement saying, "While we are very disappointed with the ruling, we're reviewing it now and exploring all potential options-including a possible appeal. The statue remains in Marconi Plaza and will continue to be secured in its existing box."

Bochetto says he's working to have the box around the statue removed.

You can read more on the judge's ruling, here.