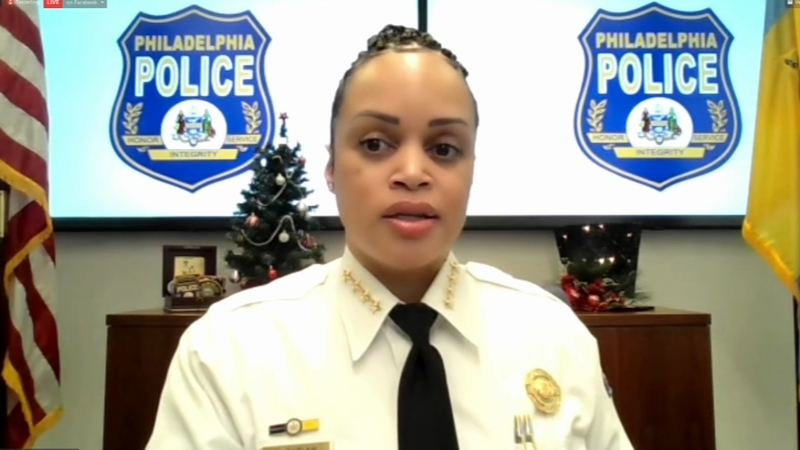 Outlaw responds to reports she's on shortlist for NYC commissioner

PHILADELPHIA (WPVI) -- Philadelphia Police Commissioner Danielle Outlaw addressed rumors that she will be leaving her post to become the new top cop in New York City.

Outlaw spoke about the reports, from publications including the New York Post and Newsday, on Wednesday during a press briefing on the city's response to gun violence, saying she's not resigning and that this was all fueled by speculation.

"I think it's a rumor that is just out there. It's wild and it's out of control. I am not resigning today at three o'clock," Outlaw said. "I appreciate the honorable mentions and it's quite flattering quite frankly, but I will tell you I am still continuing to focus on my work here."

During the same gun violence presser I asked @PPDCommish about the @NYPDnews Commish rumors - here is her response : pic.twitter.com/bObLL4deeV

Outlaw is reported to be on the shortlist of candidates for the New York City Police Department. New York City's Mayor-elect Eric Adams has not made any announcements so far.

Outlaw said the NYPD's "process is their process" and any additional questions should be asked to them.

When asked if she would accept the job if offered, Outlaw said she was not commenting on hypotheticals.

Earlier in the day, Mayor Jim Kenney responded to the reports.

Speaking at an unrelated event on Wednesday morning, Kenney told Action News he believes it's all just "rumors" and Outlaw has not called him to say she's been offered anything.

However, he said she is extremely qualified and would make a terrific commissioner.

Story time at Christmas Village @PhillyMayor spoke to us moments ago said he’s heard the same rumors that @PPDCommish is on the short list to be named @NYPDnews Commish but said he just thinks they’re rumors because Outlaw has not called him to say she’s been offered anything . pic.twitter.com/Xeq6ko4e1C

Action News anchor Sharrie Williams sits down with Philadelphia's new police commissioner, Danielle Outlaw, to talk about the future of policing in the city.