"The school needs a period of calm and de-escalation right now," the district said.
WPVI
By Katherine Scott and 6abc Digital Staff 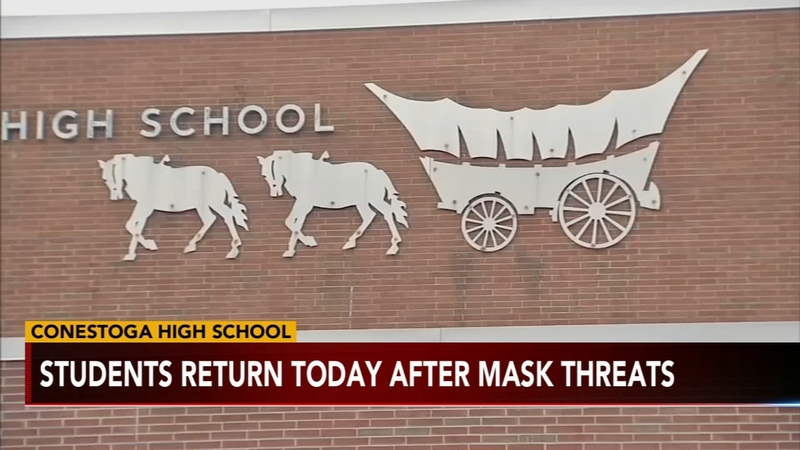 Because of recent events, school officials announced students will have a two-hour delay on Tuesday after being in virtual classes on Monday.

"We know the past few days have been difficult for many of our families," a letter from the Tredyffrin/Easttown School District superintendent and the high school principal said. "All students, families, and staff feel impacted by these emotionally-charged events."

According to the district, some students held a demonstration last Friday, removing their masks and leaving campus.

Current school rules state that masking is required while indoors.

Over the weekend, the district says there were interactions on social media that devolved to include harmful speech and even potential threats to the school.

The school switched to virtual learning on Monday as local police investigated.

The district informed families that there are no active threats against the high school. There will be an increased police presence at the school this week.

"We followed our established threat assessment procedures and at this point, we have resolved any potential threats, and will apply the Code of Conduct as appropriate. We are continuing to investigate other matters that have been reported to school officials," the district said.

The two-hour delay on Tuesday will allow the school to put resources, like counseling, in place.

"We will address the student body as a whole during homeroom to review expectations and provide reassurance that we are available to support each and every one of them," the letter read. "As a reminder, harmful speech, including racist or homophobic speech, has no place at Conestoga, or anywhere in TESD, and will not be tolerated."

The school is also asking that students refrain from further organized gatherings during school and remain in class.

On that note, district officials say they do recognize students' rights to expression.

"We are willing as an administration to work with student leaders on channeling those expressions in ways that do not challenge our ability to hold in-person school," the district said.

"The school needs a period of calm and de-escalation right now."

The district will also be offering listening sessions for students to share their thoughts on current issues to administrators and school board members.

Conestoga High School will reopen passive camera access for students who officials say may be uncomfortable attending school in person.

"Students not physically present in school will still be marked absent; however, absences for this purpose will be excused. Passive camera access will be available through the end of February," the district said.

As for the district's indoor mask requirement, officials say it remains in effect pending the board's reconsideration of the District Health and Safety Plan later this month.