Juan Rodriguez is accused of victimizing at least 10 people, including a woman whose home was damaged in a fire.
WPVI
By Nydia Han and Heather Grubola 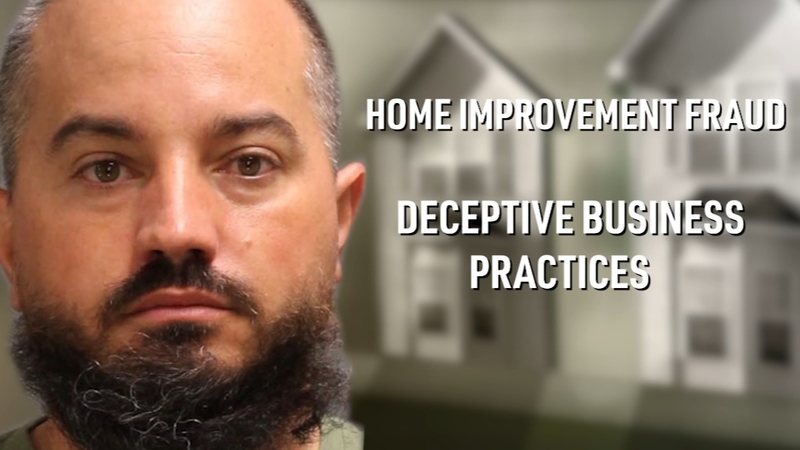 PHILADELPHIA (WPVI) -- A general contractor is facing charges, accused of defrauding people out of more than $400,000.

According to the Philadelphia District Attorney's office, Juan Rodriguez victimized at least 10 people, including a woman whose home was damaged in a fire.

Rodriguez is now facing 13 counts of home improvement fraud as well as 11 counts of theft by deception.

The Action News Troubleshooters have been warning you about Rodriguez since 2017, after multiple people complained that he took their money without ever finishing the job.

The district attorney's office even named our report in the arrest affidavit.

"I don't want to be portrayed like I'm a bad contractor," said Rodriguez in February 2021.

The Action News Troubleshooters have talked to dozens of homeowners over the years. But this time they also had the opportunity to talk to a contractor who is the target of multiple accusations.

Nydia Han told Rodriguez that customers she talked to said he lied to them.

Erika Taylor, Maxna Germaine, Dale Schmid, Charlotte Conway and Tina Barlow are just some of the people who did.

"He would say he was coming. He would never show up," said Taylor of Roxborough.

Since 2017, the Action News Troubleshooters have spoken to seven people who all say Rodriguez took money and never finished their jobs. Then, in many cases, failed to provide refunds.

"I was pissed! For you to take advantage of me knowing, I mean, it's hard out here," said Barlow of Southwest Philadelphia.

"We believe that he had an intent to steal from these victims," said Philadelphia Assistant District Attorney Anthony Gil.

The affidavit mentions the Troubleshooters report.

"It was actually very helpful," said Gil. "You interviewed Rodriguez and in your interview with Rodriguez, he indicated that the majority of these cases, the reason why he did not return the money or he walked off the job were due to issues with COVID."

Another update: Dale Schmid has now been awarded a judgment in his case against Rodriguez.

"I am thrilled there was a coalition of us that came together," he said.

And you might remember the Troubleshooters also sparked action by the Pennsylvania Attorney General's office. Litigation is pending in a lawsuit it filed against Rodriguez after deactivating his contractor registration last year.

If you had or have a contract with Rodriguez, the district attorney's office wants to hear from you if you have an issue.