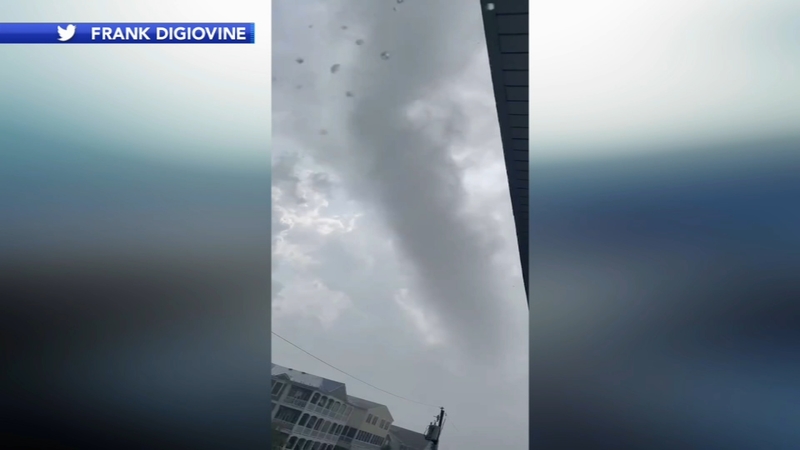 BETHANY BEACH, Delaware -- The severe weather that swept through the region on Thursday also impacted Delaware.

Action News viewer Frank DiGiovine shared video of a waterspout starting to form over his home in Bethany Beach.

DiGiovine quickly - and wisely - went back inside to seek shelter as the storm rolled through.

The National Weather Service has a team investigating storm damage in this area on Friday.

According to a post on weather.gov, a waterspout is defined by the National Oceanic and Atmospheric Administration (NOAA) as "funnel which contains an intense vortex, sometimes destructive, of small horizontal extent and which occurs over a body of water."

"The belief that a waterspout is nothing more than a tornado over water is only partially true. The fact is, depending on how they form, waterspouts come in two types: tornadic and fair weather.

Tornadic waterspouts generally begin as true tornadoes over land in association with a thunderstorm, and then move out over the water. They can be large and are capable of considerable destruction.
Fair weather waterspouts, on the other hand, form only over open water. They develop at the surface of the water and climb skyward in association with warm water temperatures and high humidity in the lowest several thousand feet of the atmosphere. They are usually small, relatively brief, and less dangerous. The fair weather variety of waterspout is much more common than the tornadic."

Several tornadoes in the tri-state area

A number of tornadoes hit the tri-state area on Thursday evening in Pennsylvania and New Jersey.

In Bucks County, a tornado heavily damaged a car dealership in Trevose and left damage in other nearby communities, including Bensalem.

Video shows what it was like inside a Trevose, Pennsylvania car dealership as a tornado tore through the area on Thursday evening.