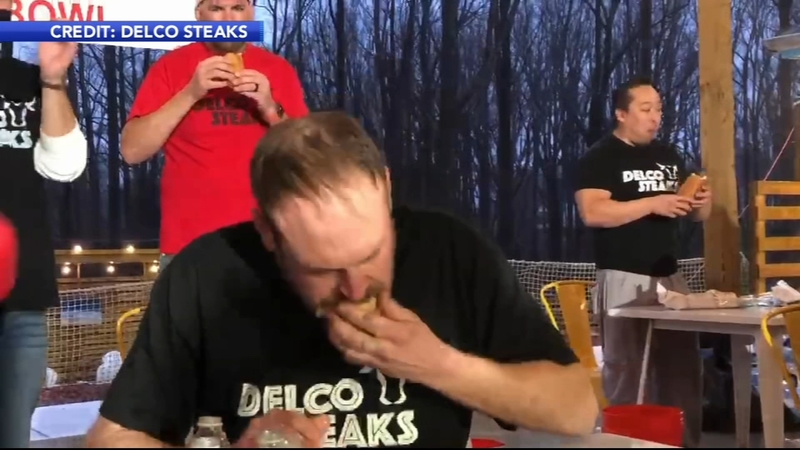 BROOMALL, Pennsylvania (WPVI) -- A massive two-foot-long cheesesteak was the highlight of a big, but socially distant contest in Broomall, Delaware County.

More than 40 contestants battled it out, each chowing down on 'The Delco' cheesesteak which has one-and-a-half pounds of meat.

One contestant finished before all the others: 38-year-old Dan Kennedy of West Decatur, Pennsylvania.

It is often imitated, but nothing can beat and an AUTHENTIC cheesesteak!

Kennedy devoured The Delco in 1:34 to win it all. He had already eaten his first 'Delco' in 1:39 during the qualifying round.

He won a championship belt and an all-expense paid trip to Cancun.

The Cheesesteak Bowl was held at the Splash Swim Club in Marple. Former Philadelphia Eagle Brent Celek served as commissioner of the event.

Delco Steaks also donating a portion of the contest's proceeds to the charity Coaches vs. Cancer.

It comes with peppers standard (a Philly Cheesesteak no-no) and weighs around 3 pounds. Some praise it as the best Philly cheesesteak ever and you can only get it in Delaware.