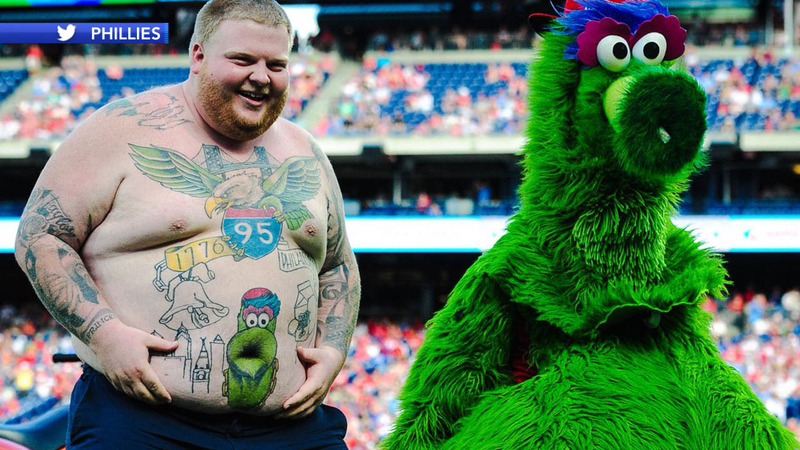 PHILADELPHIA (WPVI) -- The mega Eagles fan whose body was seen covered in Philadelphia tattoos made an appearance at Citizens Bank Park on Sunday to meet someone he knows all too well.

Action News met Robert Dunphy on Thursday night during the Eagles-Packers game after making an overnight trip to Lambeau Field.

But it was his tattoos that really sparked our attention. He literally carries Philadelphia everywhere he goes.

A mega Eagles fan, who embodies everything Philadelphia, made the trip to Lambeau Field to see the Packers take on the Birds on September 26, 2019.


Dunphy says he's even getting the Artic Splash on his left side - a brand of lemon-flavored iced tea sold in Philadelphia.

On Sunday, during the Phillies' last game of the season, Dunphy was joined by the Phanatic on "Fan Appreciation Day."

"Doesn't get any more Philly than this," the Phillies said in a tweet sharing a side-by-side photo.

The pair even had a dance off.

Dunphy told Action News he's is predicting the Birds are going to go all the way this season.

"We winning it back this year," says Dunphy.