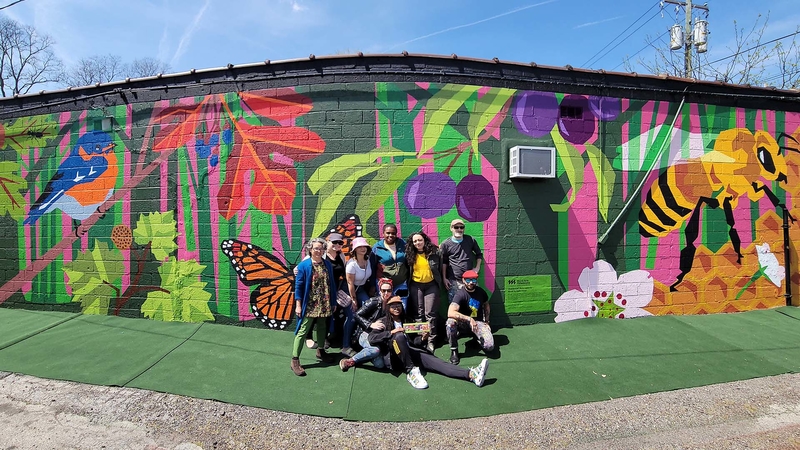 PHILADELPHIA (WPVI) -- "I personally have always been inspired by plant and animal life and art," said Eurhi Jones. "So, when I get any chance to take a somewhat not-so-exciting corner of the city and green it up, it's thrilling."

Jones knew she wanted to be an artist at a young age. And through Mural Arts Philadelphia, she gets a chance to do that for a living.

"I do believe the arts has a special place because, unless we can envision a better future, it's hard to know to go for that," she said.

The location was narrowed down to the Overbrook Environmental Education Center in West Philadelphia. The former quarry filled with abandoned vehicles was transformed by Jerome Shabazz, founder and Executive Director of JASTECH Development Services, Inc. A grant from the EPA was the catalyst for change.

"We were able to clean up our site and to add in retention basins to collect our stormwater," said Shabazz. "And we have orchards on the site, we grow plants, and we do all kinds of wonderful green amenities on our facility now."

But one particular wall facing the road was far from green.

Eurhi Jones was able to draw from a selection of photographs from National Geographic's archives to design a colorful piece of art to replace the cold, bland wall.

"We picked the theme of forests thinking about native plants, native trees," she said. "The center asked for us to also put in honey bees and ants. They're hard-working creatures working in community to make the world better."

The mural was completed over 10 days of painting in all kinds of spring weather. Luckily, the weather was beautiful on Earth Day, when the big reveal took place.

People of all ages were able to appreciate the work of art that calls attention to a larger cause.

"On one hand, you have what's on the surface. And then, you see the artists who worked on it. And you see this wonderful organization that's here," said Jane Golden, Executive Director of Mural Arts Philadelphia. "And then you start to read about all the work they're doing, and suddenly, a whole other world opens up."

Golden hopes that this piece, now one of more than 4,200 in Philadelphia, will initiate a conversation and effect change surrounding the environment.

"Sometimes, it's challenging. Sometimes, it makes us want to be a better person," she said. "All those things happen from a work of art."

The West Philadelphia mural was one of several unveiled on Friday! Here's a look at the others:

After suffering damage from floods during Hurricane Ida, Fairmount Water Works is determined to rebuild and help create a fresh-water future.