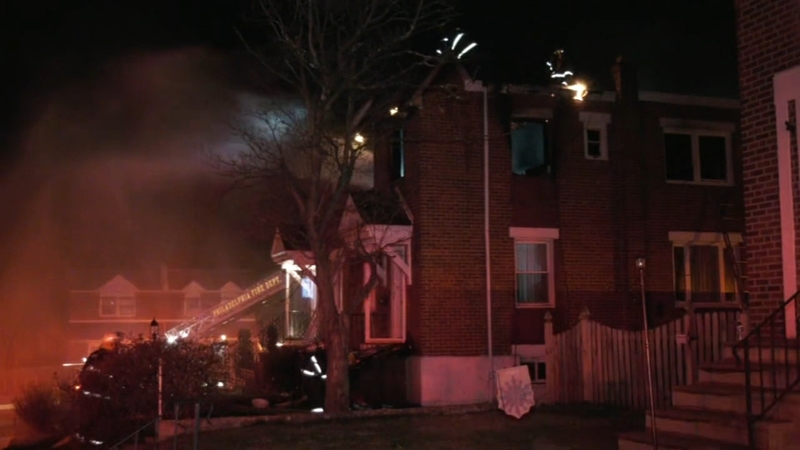 ROXBOROUGH (WPVI) -- Firefighters had to rescue a young man from a house fire in the Roxborough section of the city Sunday morning.

Firefighters said when they arrived the house was fully engulfed, with flames shooting out of the front bedroom on the second floor of the home.

Neighbors said they had never seen anything like it.

"They were immense," said Maryanne Kostic of Roxborough. "They were skyrocketing out, it was like gold just coming out and riding up."

Fire officials said a 25-year-old man had to be rescued from the building. He had stopped breathing, according to reports.

Officials said the man was revived by emergency personnel on the front lawn and then transported to Einstein Medical Center in serious condition.

Two other people suffered from smoke inhalation and were also taken to Einstein Medical Center in stable condition, according to fire officials.

The fire was placed under control around 5:05 a.m.

According to neighbors, young families with young kids live in both homes.

Kostic said she knows the one family very well.

"Tony, the woman who lives there, she has been an amazing neighbor since we have lived here," she said. "She raised her kids beautifully. An altogether great family."

After such an intense blaze, officials said it is possible the home might be damaged beyond repair and could possibly need to be torn down.

Officials from the Department of Licenses and Inspections were contacted due to an unstable roof at the scene.

Two cats and a dog were saved from the fire; rescue workers are still searching for another cat.