Weather explained: What is a flash flood?

In addition to heavy rain, a mudslide, dam or levee break can cause the National Weather Service to issue a flash flood warning.
AccuWeather
By Staff, AccuWeather 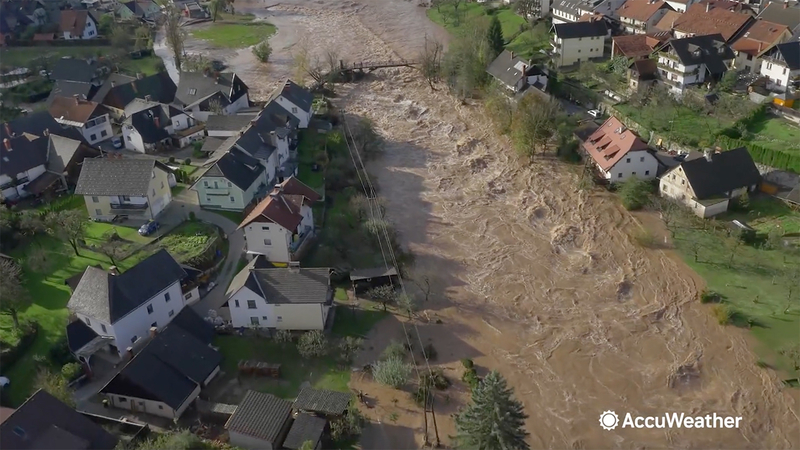 Weather Explained: What is a Flash Flood?

If you have just heard that the local forecast contains the possibility of a flash flood, then you may be wondering what is a flash flood?

According to the National Weather Service, a flood is an overflow of water onto normally dry land. Unlike a regular flood, flash floods can happen lightning-fast, hence the name flash flood.

What is a flash flood?

A flash flood must occur within six hours of heavy rainfall or another event that means that flooding is imminent, according to the National Weather Service. In most cases, the flooding will occur within three hours. In addition to heavy rain, a mudslide or dam and levee breaks can cause the National Weather Service to issue a flash flood warning.

Where do flash floods occur?

Flash floods can occur anywhere, but they are more likely to occur in developed areas, like cities, than in rural ones. The reason is that the water has fewer places to sink into the ground in cities where many areas are paved, covered in concrete, or made of another material that water cannot get under. The way that buildings are often built close together in cities also means that water is often channeled. Water almost always runs downhill. Therefore, some areas may have more flooding than others.

Will you have time to prepare for a flash flood?

In many cases, there is little or no time to prepare for a flash flood. Make sure that you keep your eyes on the local forecast so that you receive the warning as early as possible if one is issued. Then, move to the highest point possible.

During a flash flood, storm drains can become quickly overwhelmed, sending torrents of water to lower points. The same is true of pipes and other items designed to carry water underground.

You should never go to the basements or underground parking garages if a flash flood is imminent. It is never safe to try to drive or walk through standing water. Any flowing water -- not just during flash flooding -- can sweep your vehicle away or you off your feet.

According to the Federal Emergency Management Agency (FEMA), just six inches of water in a flash flooding event can reach the bottom of most passenger cars, causing the cars to lose control or stall. A stalled car is the last thing you want during flash flooding. You're stationery as water flows around you. A foot of water will float many vehicles. Two feet of rushing water will carry away most vehicles, including SUVs and pickups. When encountering a flooded roadway, remember "Turn Around, Don't Drown." It's hard to gauge what is under all the flooding. There could be chunks of the road that are missing.

Must it always rain where a flash flood occurs?

You may not see a drop of rain before being inundated with flooding. Rain may have occurred at a higher elevation and run into your area. Snow may melt quickly and spark flash flooding. A levee or dam may also break and send a wall of water crashing your way.

What was the deadliest flash flood to occur in the 1900s?

There have been many deadly flash floods throughout history, but the most deadly occurred in India when the water went over the top of the Machchhu Dam. The disaster may have killed up to 45,000 people, but no one knows for sure because the government dug mass graves and buried people quickly before diseases could spread. It is estimated that the dam break that occurred on August 11, 1979, was made worse by the fact that people downstream from the dam failed to get word that the levee was about to break. Therefore, they did not have time to get out of harm's way. Over 100 people sought refuge in a temple on a hill in Morbi, but the water overtook the temple, and they had no place to go.

What are some of the deadliest flash floods in the United States?

The deadliest flash flood to occur in the United States was the Johnstown Flood occurring in Johnstown, Pennsylvania, on May 31, 1899. This flood, which killed more than 2,200 people, happened after the South Fork Dam broke, releasing about 14.55 million cubic meters of water into a valley. Another deadly one occurred on June 14, 1903, in Heppner, Oregon, when torrential rains knocked a steam laundry off its foundation. Then, the store acted like a dam holding back the water before finally crumbling. When it fell, a wall of water reaching up to 50 feet tall crashed down on the community. The storm left 247 people dead in its wake.

What should you do if the local forecast calls for flooding?

If the local forecast includes a flood watch, then check your emergency kit to be sure that it is ready if one occurs. Then, think through which roads have the highest elevations. If possible, plan to get out of low-lying areas before a flood warning is issued. If you are under evacuation notice, be sure to stay tuned to your local news sources and follow orders. If you cannot get out of a building, then head to the highest level and call 911.

The National Weather Service first issues a flood watch if there is time telling you that conditions may be right for sudden flooding. You should prepare your emergency kit, especially if you are in an urban area, as the water has less room to sink into the ground. If the National Weather Service issues a flood warning, then take action immediately. Stay tuned to local news sources to see if a flooding evacuation is ordered and follow local authorities' recommendations.