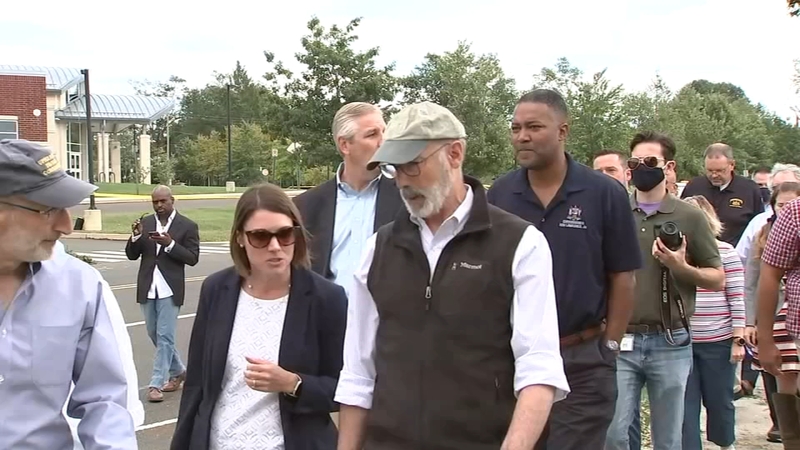 HORSHAM, Pennsylvania (WPVI) -- Gov. Tom Wolf came to southeastern Pennsylvania on Friday to tour the damage left behind after the remnants of Hurricane Ida brought severe weather, including tornadoes, to the region.

The National Weather Service confirmed EF -2 tornadoes touched down in both Montgomery and Chester counties.

There is one confirmed storm-related death in Downingtown, and in Montgomery County three people lost their lives in the storm.

Downingtown Police Chief Howard Holland showed Wolf the extensive damage to their police station, their vehicles and their equipment.

The chief said he is now thinking ahead to the next big emergency.

"It's not just, 'hey, what happened yesterday?' It's, 'hey we need to prepare for tomorrow,'" said Holland.

Investigators from the National Weather Service confirmed an EF-2 tornado from the Fort Washington area of Upper Dublin Township to Horsham, Pa.

The Upper Dublin Township Building, which houses police headquarters, was also severely damaged. County officials say the building is unusable at this time.

Part of Wolf's goal on the tour was to assess the extent of the damage with PEMA, but also to connect with first responders to thank them - and to see what the state and everyone responding to severe weather could do better the next time.

Recently Wolf sent a letter to FEMA asking the federal agency to lower the damage threshold of $19.6 million needed by the entire commonwealth to unlock federal aid.

"Secretary Padfield talked about that $19 million threshold, but that's sort of going out of fashion now because there are so many of these flash flooding events that happened in localized areas and they never rise to $19 million. Police cars are gone, public infrastructure is damaged and they don't rise to the level to get the real money," Wolf told Action News reporter Annie McCormick on Friday.

"Now that communities around the commonwealth have transitioned from response to recovery, I wanted to join other leaders in seeing the flooding and storm damage for myself and to talk to residents firsthand," said Gov. Wolf. "As the recovery process gets underway, PEMA will be assisting counties with damage assessments to ascertain what level of federal support we can hope to qualify for."

In a number of areas, major roadways were closed due to flooding affecting the roads and bridges. The number of closed roadways had decreased from 400 on Thursday to more than 160 by Friday morning.

"Where necessary, we remain in disaster relief mode and we're ensuring our teams have what they need," Gramian said. "As the waters recede we will conduct post-flood road and bridge assessments and conduct bridge inspections when the condition warrants."

PennDOT estimates that approximately 800 bridges statewide will need post-flood inspections. To complete those inspections as quickly as possible, the department will deploy bridge inspectors and other resources from lesser impacted areas of the state to the most impacted areas.

"PEMA will be cooperating with our partners in local government to conduct damage assessments in as timely a fashion as possible," said PEMA Director Randy Padfield. "As communities begin cleaning up and making repairs, we want to urge those affected to document their efforts, take pictures of damages and keep copies of their receipts. Having access to these records can be very helpful in obtaining federal recovery assistance, should it be made available."