Caught on video: Gunfire erupts during vigil for teen in Southwest Philadelphia

The vigil was being held to mourn 19-year-old Donovan Porter, who was killed inside a takeout restaurant.
WPVI
By 6abc Digital Staff and Dann Cuellar 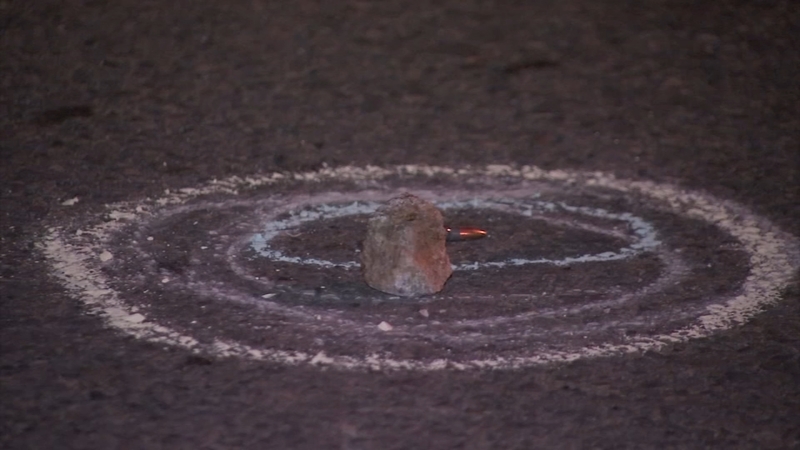 Caught on video: Gunfire erupts during vigil in SW Philly

PHILADELPHIA (WPVI) -- Action News was on the scene as shots were fired during an anti-violence vigil on Friday night in Southwest Philadelphia.

About 100 to 150 people had gathered on the 5200 block of Warrington Avenue for the vigil to mourn the loss of 19-year-old Donovan Porter, who had been gunned down inside a takeout restaurant Tuesday.

Impassioned speeches about gun violence were being made, including by the victim's aunt, when shots rang out, resulting in a stampede.

Action News was on the scene as shots were fired during an anti-violence vigil on Friday night in Southwest Philadelphia.

In all the chaos, one mother became separated from her four-year-old daughter. They were later reunited.

Somebody appeared to be trying to calm a man with a gun who then went inside a home.

Colwin Williams, with Philadelphia Cure Violence, had been speaking to the crowd minutes earlier.

"These gunshots are real. You just had a chance to experience this," Williams told Action News. "Here we are mourning the passing of a young man, and here it is, gunshots."

RELATED: Police not taking 'foot off gas' as city records deadliest year since 2007

Police who were on the block nearby arrived within seconds with guns drawn looking for the suspect.

"We just praise God, nobody was hurt," added Williams. "Besides bumps and bruises and people getting run over."

Residents expressed their outrage that this could happen at what was supposed to be a peaceful vigil.

"It's stupid and y'all walking around with the Black Lives Matter masks, for what? You are doing it to each other," said Elaine Lawrence. "Kids can't play safe on the streets, you can't do nothing."

Just hours earlier at police headquarters, Commissioner Danielle Outlaw warned that because of the warmer weather this weekend, they were expecting more gun violence.

"When we know especially where there are areas where there's potential for retaliatory shootings," said Outlaw. "If there are planned or unplanned events and we get information, we make sure not only that we have increased visibility, but we have appropriate levels of staffing in each of those areas."