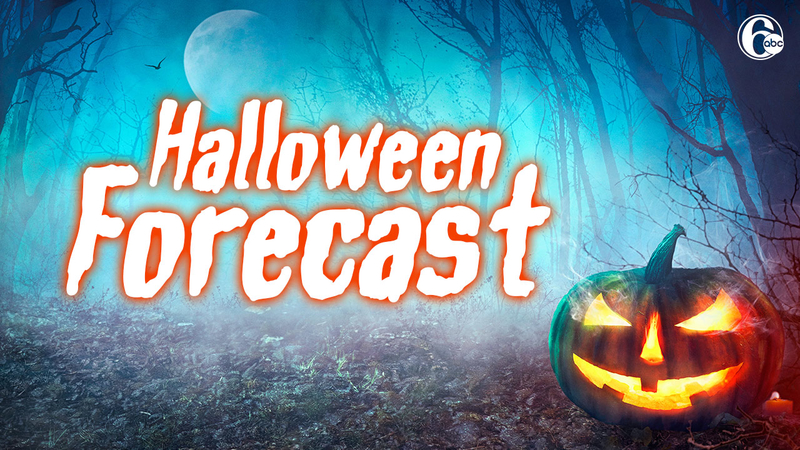 PHILADELPHIA (WPVI) -- Some towns around the Philadelphia area have moved the date for trick-or-treating because of Thursday's rain.

However, the latest track by AccuWeather is calling for a little treat for everyone who will be celebrating Halloween on October 31.

If you are in the northern and western suburbs, you probably want to go home with that all candy by 8:30 p.m. or 9 p.m. because there will be another line of storms coming through.

AccuWeather is calling for a cloudy evening with a stray shower being possible. But most will find it dry to walk around the neighborhood in those costumes.

A bigger problem will be a breeze blowing the rain off the trees from the earlier rain.

After 10 p.m., when trick-or-treating is over, the weather takes a turn. Look out for strong gusty thunderstorms arriving from the west. Some of these storms could produce damaging wind gusts of 60 mph or higher and even an isolated tornado, so it's important to be indoors on the lower floors as these late night storms roll through.

Becky Lyons was all set for her annual Halloween party but now she'll have to hold off. Mullica Hill, New Jersey is just one of several places in the area that decided to postpone Halloween due to a rainy and windy forecast.

"In the 80s, Halloween was never canceled because of a little rain or the freezing cold. I remember being very bundled up," said Lyons.

She's a bit annoyed but Lyons says she understands why town leaders decided to push Halloween to Friday night.

"I also want the kids to stay safe and I think they were calling for 40 mph winds and so I can understand that," Lyons said.

Rain forcing some towns to postpone Halloween. Gray Hall has more on Action News at 4 p.m. on October 31, 2019

Mantua, New Jersey also postponed trick or treating until Friday. The Ruffalo twins are mixed, sister, Mara is okay with holding off a day, but brother Mike is not so happy.

"I want as much candy as possible, so I would rather have it because it is not even raining out and I just rather have it today than tomorrow," said Mike Ruffalo.

Mom, Michelle, was the voice of reason.

"Halloween being canceled is ok for me because the police want to do the right thing for the community and a lot of kids go out at night and visibility is very difficult when it does rain and even in the dark when it doesn't rain," said Michelle Ruffalo.

Some parents we talked to say growing up, the weather was never a reason to cancel Halloween.

Cecily Tynan hsa your AccuWeather forecast as seen on Action News at 6 p.m. on October 31, 2019.

Despite the call from AccuWeather of a mostly dry trick-or-treating evening period, some places around our area are not taking any chances.

Some communities opt to move trick-ro-treating due to forecast: Katherine Scott reports on Action News at Noon, October 31, 2019

Trick-or-treating in Mantua Township, New Jersey will now take place on Friday, November 1, from 3 to 8 p.m.

In Hammonton, trick-or-treating was moved one day earlier to Wednesday, October 30 from 5:30 to 8 p.m. The school's Halloween parade was also rescheduled to Wednesday.

Hammonton's announcement said the Quality of Life Committee made the decision in collaboration with the police department and the school district. They noted that the safety of children is their number 1 priority.


Officials in Ocean City, New Jersey followed suit. Trick-or-treating will now be held on Friday, from 5 p.m. to 8 p.m.

For some, the decision boils down to safety. Rain could mean reduced visibility and slippery sidewalks and roads, especially given the wet leaves.

Trick-or-treating in Millville, New Jersey will also take place on Friday, between 4 p.m. and 7 p.m.
Philadelphia police hope to give kids safe Halloween with 'trunk-or-treat'

In Spring Township, Berks County, trick-or-treating was moved to Wednesday, October 30 from 5:30 to 9 p.m.

West Chester Borough moved its trick-or-treating to Friday, from 6 to 8 p.m.