One resident says he hasn't seen this kind of flooding since Superstorm Sandy back in 2012.
WPVI
By TaRhonda Thomas and Bob Brooks 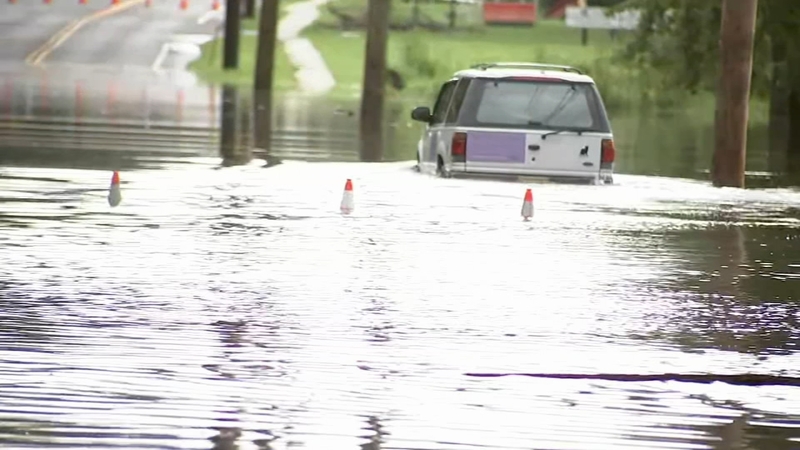 PRINCETON JUNCTION, New Jersey (WPVI) -- Storm Henri crawled over the Northeast on Monday morning, continuing to unleash downpours over a region already saturated by heavy rain that swamped roads, closed bridges and left people stranded in their vehicles, and winds that knocked out power to over 130,000 homes.

Henri made landfall Sunday on the coast of Rhode Island, and the National Hurricane Center warned that the slow-moving storm would continue dumping heavy rains on wide swaths of the region.

Tropical Storm Henri has made landfall in Rhode Island. The storm system brought heavy winds and rains to the area as it began pummeling the northeastern U.S. coastline early Sunday.

It was downgraded from a hurricane before reaching New England, leaving many to breathe a sigh of relief. There were few early reports of major damage due to wind or surf.

The storm was later downgraded to a tropical depression, but its heavy, sustained rains raised concerns about further flooding from the storm that threatened to stall over the region before pivoting to the East and moving out to the Atlantic Ocean on Monday night. Some of the highest rain totals were expected inland.

WATCH: A boat breaks away from a person's property in Princeton Junction, NJ and floats down a pond into a dam. That same pond flooded Clarkesville Rd., which is now closed. #TropicalStormHenri @6abc pic.twitter.com/renl7oTFJV

In the Philadelphia region, Mercer County, New Jersey felt some of the strongest effects of the storm.

As water rushed across Clarksville Road in Princeton Junction, some drivers decided to take a chance. They drove across the bridge that was flooded with water from a nearby pond. The trickle became a full-on wave on the other side of the bridge as the water rushed out of a dam.

By mid-Sunday morning, police didn't want to see any more drivers take chances so they shut down the road.
EMBED More News Videos

The same type of flooding happened on South Mill Road in West Windsor Township. Sundeep Nidra walked by with his dog as one car got stranded in the water.

"The left side (of the road) is the deeper side. So anyone trying to go up is going to get stuck," Nidra said after seeing that type of flooding over the years that he's lived in the area.

The daylight brought no relief in Princeton Junction. Carl O'Brien lives nearby and says he hasn't seen that type of flooding since his nearly nine-year-old son was born.

A resident in Helmetta said she had lived there for 40 years and it's the worst flooding she has ever seen.

"The last time this happened was when (my son) David was two weeks old during Hurricane Sandy the same thing happened," he said.

The flooding from the pond along Clarksville Road sent a boat breaking away from one resident's property and down into the water past the dam.

"I was just worried that it would clog the dam and cause water to further rise," said Chris Bell whose property sits right next to the pond. The flooding is worrisome for him and many other residents.

"Our backyard's flooded," he said as he watched the water go over the bridge. "It's a bit worrying, you know because it's supposed to rain all through tomorrow."

Stan Brunkovsky says his parents just bought their home near the pond a year ago. As a result of the flooding, renovations made to their back yard have been washed away and their basement is now flooded.

"Couches, TVs and electronics. It's a mess down there," said Brunkovsky.

He says they tried to save what they could but there's a lot to repair.

"We were starting to pave new bricks and make a new path down there and unfortunately all the water went over it. All the decorations and the path got ruined," said Brunkovsky.

In other parts of the Garden State, residents had to be rescued due to flooding. At least 150 people were rescued by boat in Helmetta alone, WABC-TV reported.

Pennsylvania Task Force 1 was deployed to Windsor Locks, Connecticut to assist with the aftermath of Henri.

The team was activated early Saturday before hitting the road Sunday morning.

Pennsylvania Task Force 1 has been deployed to Windsor Locks, Connecticut to assist with the aftermath of Henri.

Once the storm blows through, the team will await instructions from the state about where they are needed most before getting to work.

"For this particular mission, it's obviously water-based. That's not to say that there couldn't be buildings that collapse and whatnot, but typically our experience has been particularly water, evacuations, rescue," said Pagurek.