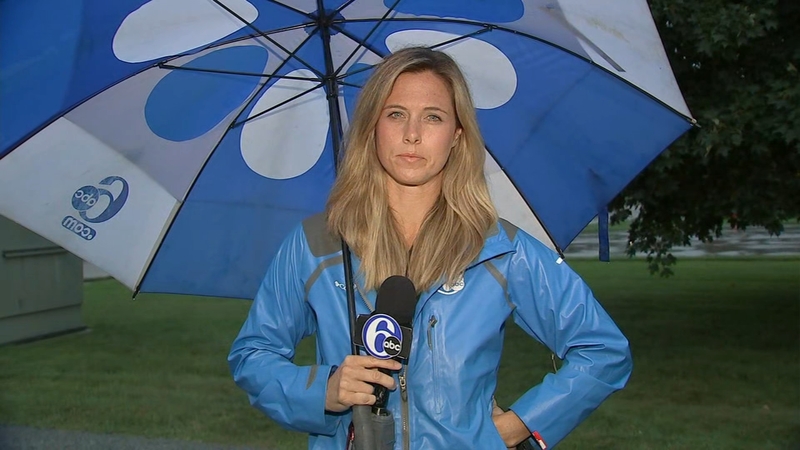 BRIDGEPORT, Pennsylvania (WPVI) -- Residents across the Delaware Valley are bracing for flash flooding, possible tornadoes and severe storms from the remnants of Ida.

The rain started to move into the region early Wednesday morning.

In West Norriton Township, Bill Baker and his wife were busy tying down their outdoor items Tuesday in anticipation the Schuylkill River rising over its banks.

The remnants of Hurricane Ida are expected bring torrential rain to parts of the region starting Wednesday.

It's something emergency management crews around Montgomery County are prepared for as well.

West Norriton Township Emergency Management Director Jason Bobst says anyone living along the Schuylkill River needs to keep an eye out when the rain begins. He advised residents living in the Riverview Landing and Arrive apartment complexes to move their cars.

Here's what to expect


DOUBLE THREAT TOMORROW
-Flood threat NW of Philadelphia
-Severe storms and tornadoes DE, NJ, and extreme SE PA
The remnant low from Ida, along with a stalled front, will prove to be a dangerous set-up starting Wed aft and lasting into Wed night. Be weather aware please. @6abc pic.twitter.com/qIvrqnTdxT

"We've seen storms within the last seven years that we've had water almost up to the bike trail, which puts almost all those apartment buildings underwater," said Bobst.

The remnants of Hurricane Ida are expected to drop a few inches of rain across the region.

Over in Bridgeport, shop employee Carmen Alvarado of Suzi-Jo's Donut Shop says the last time heavy rains impacted the area, Bridgeport looked like a rolling river. But that section of Montgomery County is just one of the usual suspects prone to local flooding in the Delaware Valley.

There is no shortage of locations along the Schuylkill and Delaware rivers vulnerable to flooding whenever rain storms roll through.

And that certainly stands for smaller waterways, like Darby Creek, according to Darby Borough Manager Mark Possenti.

RELATED: Bucks County residents raise concerns ahead of potential flooding from Ida
Some of the newer construction near the Darby Creek is built on stilts, but nearby stores like Fibbers Suds and Soda do not fall into that category. Owner Mike Truong described the impact after Isaias hit last summer.

"Last year, we got around seven or eight feet (inside the store)," he said.

Possenti hopes the borough will not have to mandate targeted evacuations, but at this point, he is not feeling very optimistic.

ALSO RELATED: Experts share tips on how to prep your home for a potential flood

"It's very tough. It's a tough decision to make, nobody wants to leave their homes. But we have to make sure the residents are safe," he said.

On Tuesday night, Governor Tom Wolf signed a proclamation of disaster emergency in anticipation of the storm.

"This dangerous storm continues to have devastating impacts across the South and as it heads toward Pennsylvania, we are expecting significant rainfall across the state. This proclamation will allow for our emergency preparedness teams to provide any support needed throughout the storm and its aftermath," Gov. Wolf said.

For more on what to expect, watch your latest AccuWeather forecast below:

AccuWeather says tropical downpours from Ida will produce flooding on creeks, streams and perhaps rivers on Wednesday and Thursday.