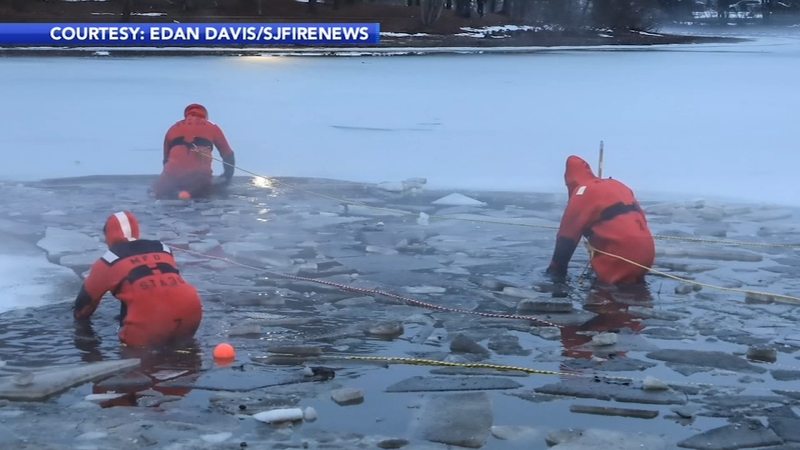 MILLVILLE, New Jersey (WPVI) -- Authorities in South Jersey are putting out a warning not to play or walk on frozen lakes and ponds after two juveniles fell through the ice on Thursday in Millville.

"Someone driving by had noticed two bicycles along the walkway here near Hankins Pond and there were tracks onto the ice and a hole in the ice," said Millville Fire Chief Michael Lippincott.

Around 5 p.m. Thursday, Millville Police Department got a call saying two juveniles were believed to have fallen through the ice in Corson Park.

In the end, it was discovered the juveniles had gotten themselves out of the water and were safe.

Lippincott says in the Philadelphia and South Jersey areas, it doesn't really get cold enough to produce ice thick enough to walk on.

He says ice should be at least 4-inches thick to walk on it safely.

Last month in Pennsylvania, a teenager came to the rescue when a 13-year-old boy and his friend fell through the ice in Lake Afton in Yardley.

"He was screaming for help. His friend tried to help him and he ended up going in with him," said Corey Hemberger of Middletown Township.

He used his hockey stick to help pull the boys to safety and was hailed a hero.

Chief Lippincott says an untrained bystander should not go out onto the ice.

He advises the strategy of "preach, reach, throw, then go."

Preach: talk to the victim and keep them calm.

Reach: can you reach them without going onto the ice?

Throw: throw them a rope or floatation device.

Go: as a last resort, go out to them using extreme caution.

"We don't want untrained rescuers out on the ice becoming additional victims," said Lippincott. "If you can reach out from the shore without going out onto the ice with a tree branch, a ladder, a rope even jumper cables out of your car, somehow you can get that out to them to try to pull them in."