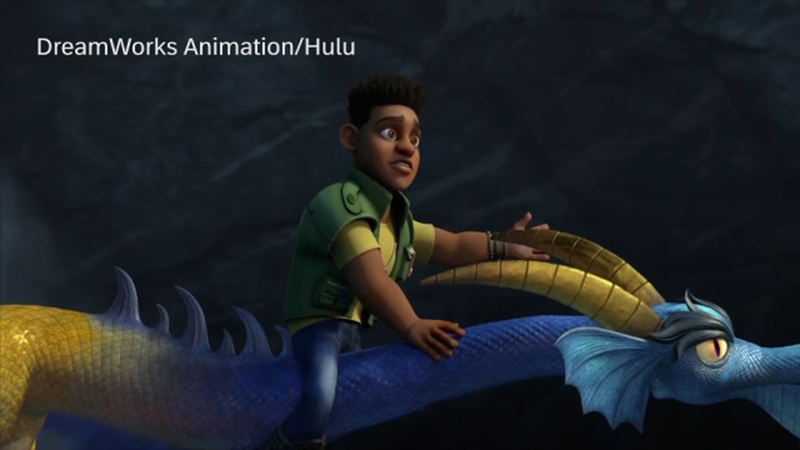 NEW YORK -- Marcus Scribner is now a dragon rider! He's thrilled to be part of the "How to Train Your Dragon" universe in the new DreamWorks Animation/Hulu production "Dragons: The Nine Realms."

"To get to be a part of the show and become a dragon rider is sort of a dream come true," Scribner, best known for his role on ABC's "Black-ish" said.

The animated series is set 1,300 years after the events of the "How to Train Your Dragon" movies.

Dragons are seemingly just a legend to the modern world.

But a group of teens finds that they are still very much alive and well as they attend school and hang out together at a giant fissure in the Earth, where their parents work and do research.

"Anytime the Earth cracks open, you know there is trouble brewing!" Scribner said. "Especially when there are dragons involved."

Scribner stars as one of the kids, "D'Angelo" who is there with his father Phil.

"My character, I feel like, is the biggest listener of the group, but is still willing to put his neck out there to protect dragons and follow through with their dragon rider code," Scribner said.

The kids know, they have to keep their new dragon friends a secret in order to protect them.

Scribner says that he thinks parents and kids will love the overall message of the series.

"Even though it's in this mystical world and there are dragons and stuff, I feel like one thing that unites all the kids together and all the characters in the show is family, friendship, and the desire to preserve nature," he said.

You can begin streaming "Dragons: The Nine Realms" starting Thursday, December 23 on Hulu.