The view from Chopper 6 showed heavy flames coming from the home as crews worked to extinguish the blaze.
WPVI
By 6abc Digital Staff 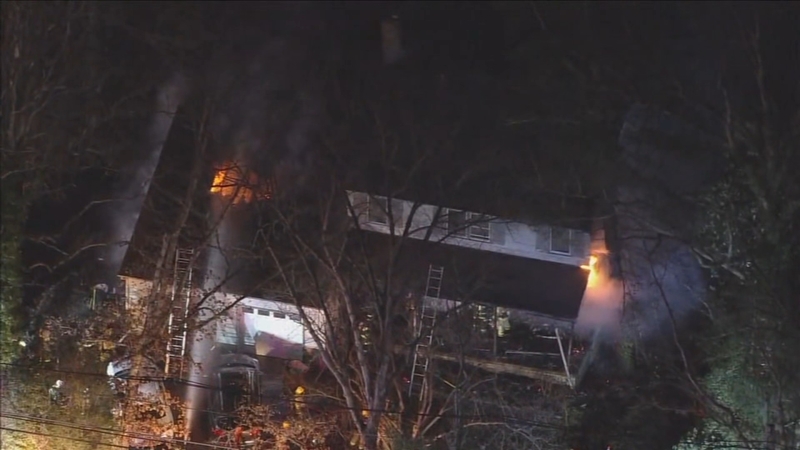 Crews responded to the fire on the 100 block of Taunton Boulevard around 5:45 p.m.

The view from Chopper 6 showed heavy flames coming from the home as crews worked to extinguish the blaze. Firefighters responded to the call within minutes, but neighbors said the fire spread fast.

"It went very quickly. We were only out here about a minute or so before the whole house was ablaze," said next-door neighbor Raymond Lindsay.

Authorities say a 74-year-old woman was found dead on the second floor of the home.

Neighbors identified the woman as Kathy Hoffman. They say she lived there for more than 20 years with her husband, who passed away in December.

Neighbors said they were shocked and saddened to find out she didn't make it.

"We didn't know at first if she had gotten out or not, then we saw her car, her family was coming over to have dinner with her," said Lindsay.

While officials were investigating a Medford house fire that left a 74-year-old woman dead, people placed flowers at the trunk of a tree for a small memorial.

While officials were back and forth at the home investigating on Friday, people placed flowers at the trunk of a tree on the front lawn for a small memorial.

"She was a nice lady, not much more you can say with this. It's terrible for her daughter and her kids," Lindsay said.

Lieutenant Zane with Medford Township Police said the cause of the fire is still under investigation, and they don't believe any criminal activity was involved.

The fire is being investigated by Medford Township Police and Fire departments, and the Burlington County Fire Marshal's Office.