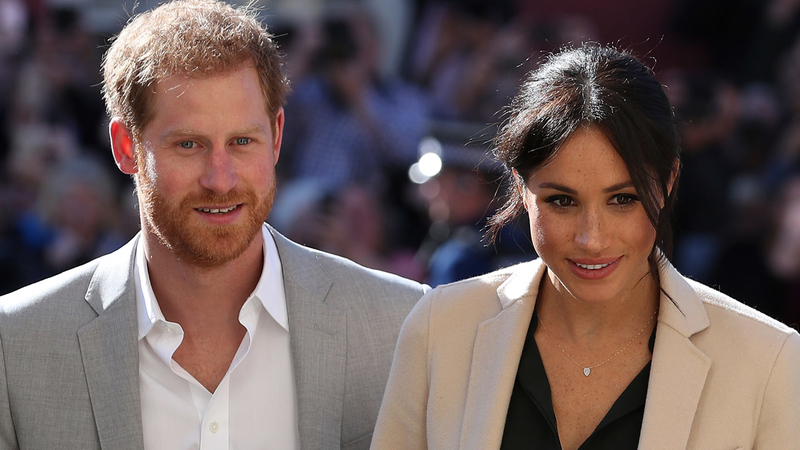 LONDON -- Prince Harry and his wife, the Duchess of Sussex, are expecting their first child in the spring, Kensington Palace said Monday.

The announcement came hours after Harry and the former Meghan Markle arrived in Sydney at the start of a 16-day visit to Australia, Fiji, Tonga and New Zealand. Hundreds of people gathered to catch a glimpse of the couple after they landed.

"Their royal highnesses have appreciated all of the support they have received from people around the world since their wedding in May and are delighted to be able to share this happy news with the public," the palace said in a statement.

Here's a look at the life of American actress Meghan Markle, who, since marrying Prince Harry, has been known as Meghan, Duchess of Sussex.

After their arrival in Sydney, the prince and the former American actress held hands and walked out an airport rear entrance and into a car. Meghan, wearing skinny black pants and a black, burgundy trimmed coat, was smiling and clutching folders, while Harry gave a thumbs up to bystanders.

The announcement of the pregnancy confirms weeks of speculation from royal watchers about why Meghan was not joining Harry on his Sydney Harbour Bridge climb set for Friday.

Harry and Meghan - along with Prince William and his wife, Kate, the duchess of Cambridge - have stepped to the fore in the last year as Queen Elizabeth II, 92, slightly reduces her public schedule.

Monday's announcement is welcome news in Britain, where Meghan has won many hearts since her engagement to Harry was announced last December.

British Prime Minister Theresa May offered her "warmest congratulations" on the news, which provided a bit of relief from concerns about the stalled Brexit negotiations. "Wishing them all the best," May tweeted.

The royal couple started dating in July 2016 after they were introduced by friends, and Harry courted Meghan on a trip to Africa shortly afterward. They kept their relationship secret for several months but word eventually leaked to the British press.

glittering service in Windsor in May.They were married in May in a spectacular ceremony on the grounds of Windsor Castle that drew tens of thousands of people to Windsor and was watched by a global TV audience.

Harry has become immensely popular in Britain, in part because of his military service and tireless work on behalf of wounded soldiers, and he has spoken often in recent years of his desire to settle down and start a family.

When the couple got engaged, Harry was asked about plans for children.

"You know, I think one step at a time, and hopefully we'll start a family in the near future," he said.

Meghan has also talked about wanting to have children.

She said in a 2016 interview that becoming a mother was on her "bucket list." She was still acting in "Suits" at the time.

"I can't wait to start a family, but in due time," she said.

Meghan, with her American roots and successful acting career, has been seen as a modernizing influence on the sometimes stodgy royal family, and she is credited by many for bringing happiness to Harry, who has long struggled to cope with the early death of his mother, Princess Diana.

Harry has broken new ground by talking openly about his mental health issues related to the death of his mother when he was only 12, and that candidness, which is part of a royal campaign to raise awareness about mental illness and end the stigma surrounding it, has brought the royals increased public backing.

The royal couple's trip Down Under is their only international tour since they were married, apart from a two-day visit to Ireland.

Days after watching Harry's cousin Princess Eugenie tie the knot in a lavish ceremony in Windsor, the couple touched down in Sydney on an overcast morning after a regular Qantas Airways flight from London with a brief stopover in Singapore.

Sydney's weather is expected to be drizzly and cool on Tuesday, with showers forecast for most of the week.

It won't be the first time Harry has had to brave the rain in Sydney. Last year, he made a whirlwind visit to cast his eye over the Invictus Games preparations, where he charmed his fans during torrential rain.

The couple's current tour coincides with the games, which start in Sydney on Saturday. The sporting event, founded by Harry in 2014, gives sick and injured military personnel and veterans the opportunity to compete in sports such as wheelchair basketball.

Harry and Meghan will attend the games' opening and closing ceremonies. In all, they have 76 engagements scheduled over 16 days in Australia, Fiji, Tonga and New Zealand.

In Australia, they will pet a koala in a Sydney zoo, visit the drought-stricken Outback town of Dubbo and meet indigenous leaders on Fraser Island, the world's largest sand island, in northeastern Queensland state.

The royal couple was driven from the airport to Admiralty House, the official Sydney residence of Governor General Peter Cosgrove, who represents Australia's head of state, Queen Elizabeth II, Harry's grandmother. The couple had no official functions on Monday following the 17,140-kilometer (10,650-mile) flight that Qantas says takes 22 hours and 20 minutes.

Hundreds of well-wishers gathered with umbrellas outside the airport and Admiralty House in the hope of catching a glimpse of Harry and Meghan. The crowd cheered as the waving couple was driven through the gates of the harbor-side mansion.

Australian Prime Minister Scott Morrison, who plans to climb with Harry to the top of the Sydney Harbour Bridge, told Parliament on Monday that he commended the prince for coming to Sydney for the Invictus Games and welcomed the couple.

"I want to ... commend Prince Harry for his tremendous initiative in lifting the spirits of every single serviceman and woman all around the globe," Morrison said.

After the announcement that Harry and Meghan are expecting a baby, Morrison tweeted: "What fantastic news! Australia is thrilled for you both. Looking forward to sharing in the joy during your stay down under."

U.S. President Donald Trump's representative in Britain, Ambassador Woody Johnson, tweeted: "Happy news to wake up to on a Monday morning - congratulations to the Duke and Duchess of Sussex!!"