This was the end result of a 50-year-old case that was cracked by the FBI in 2019.
WPVI
By Gray Hall 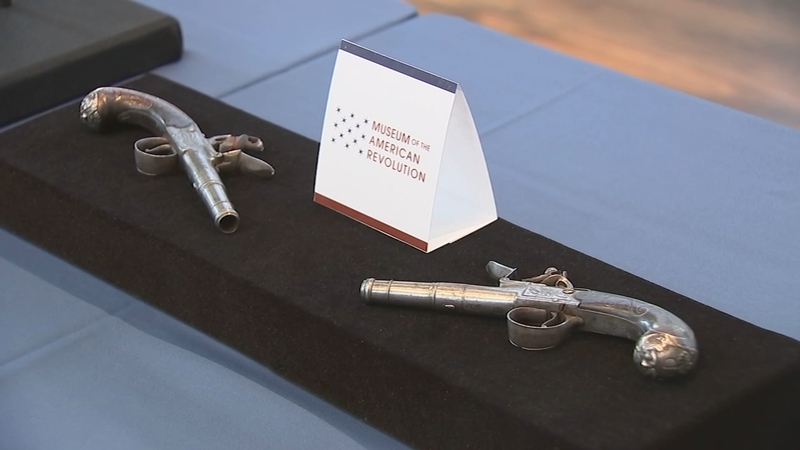 PHILADELPHIA (WPVI) -- Nearly half a century ago a thief stole antique firearms and other artifacts from museums in the area.

Finally, those items have been returned.

The stolen Revolutionary era rifles, pistols, and Native American artifacts were on display in Old City on Friday.

"These items have been gone that long but they are not been forgotten," said Dr. R Scott Stephenson, with the Museum of The American Revolution.

Thanks to the FBI Art Crime Team and local law enforcement, over a dozen artifacts will now be reunited with six museums in the Philadelphia region where they belong.

"When these objects, through theft, are taken away, that is depriving the public of access to these really significant objects," said Dr. Stephenson.

The suspect was recently arrested and convicted for stealing the historic pieces in the 1960s and 70s. It started with the theft of a rifle.

"Stolen by Thomas Gavin on Saturday, October 2, 1971, early in the day around opening time. He walked in the Visitor Center of Valley Forge, which was the state park, and walk out with a rare, historic artifact of the Revolutionary War," said Kevin Steele, Montgomery County District Attorney.

Investigators never gave up on the case and reopened it in 2009. They are hoping this case will lead to other museum thefts being solved.

"The absence of these artifacts from the museum's collections represented not just a physical or financial loss but a loss to every visitor, every student and every researcher who didn't get to see the items over the years," said Special Agent Jacqueline Maguire with FBI.

FBI art crime agents and detectives from the Upper Merion Township Police Department recovered the artifacts as part of an investigation into the 1971 theft and 2018 sale of a rare surviving 1775 rifle made by Pennsylvania master gunsmith Christian Oerter.