The car struck a berm on the property of the Wendy's located at 2533 Route 130 and became airborne.
WPVI
By 6abc Digital Staff 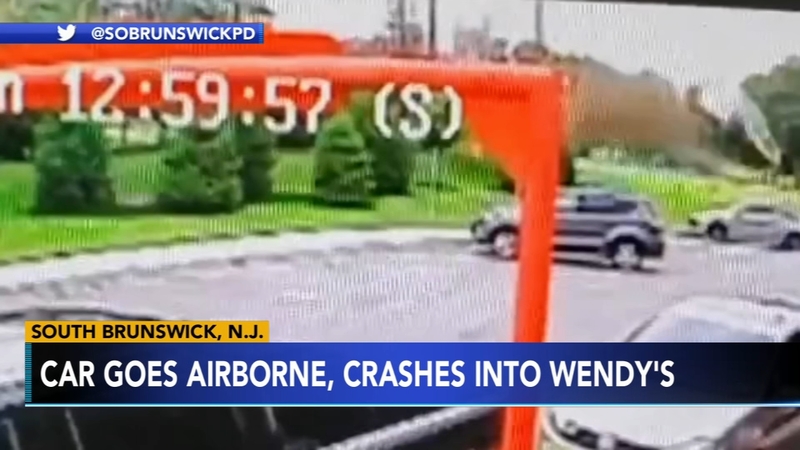 SOUTH BRUNSWICK, New Jersey (WPVI) -- Police in New Jersey say it's nothing short of a miracle that no one was seriously hurt when a car went airborne and crashed into a Wendy's.

Police say the driver of a Toyota Corolla was headed southbound on Route 130 near Melrich Road in South Brunswick and then left the roadway.

The car then struck a berm on the property of the Wendy's located at 2533 Route 130 and became airborne.

The vehicle soared through the parking lot, striking a 2017 Audi that was waiting in the drive-thru lane.

Both vehicles were pushed into the building and outside tables.

Police say a family dining outside was nearly struck.

MIRACLE - Crash Video shows Monday’s accident at @Wendys where a vehicle launched over a berm into the restaurant. Angle 1 (Drive-thru) shows the vehicle coming over the berm. Angle 2 (Front of store) car land on table next to a table with family eating.
No serious injuries pic.twitter.com/xyBK0ducMa

The force of the impact shattered the restaurant windows, sending glass throughout the inside of the Wendy's.

Police say, despite the fast-food restaurant being crowded with customers and staff, no one inside the Wendy's was injured.

The Monmouth Junction Fire Department arrived to the scene and stabilized the Toyota before freeing the driver.

Medics transported the driver to the hospital in stable condition.

Crash on Route 130 has sent a car into Wendy's. Firefighters working to extricate the driver. pic.twitter.com/qlWmiJfZgh

A child who was a passenger in the Audi complained of pain and was taken by family members to an area hospital, police say.

"This is nothing short of a miracle that no one was seriously injured or killed in this crash," South Brunswick Chief Raymond Hayducka said. "To think it was the middle of the day, people were eating both inside and outside and none of them were injured. The building was damaged to the point it can't be used but everyone eating was able to walk away."

The South Brunswick Building Department ruled the Wendy's needed to be closed pending a detailed examination.

Though police are continuing to investigate, they believe the driver of the Toyota may have suffered a medical episode prior to the crash.