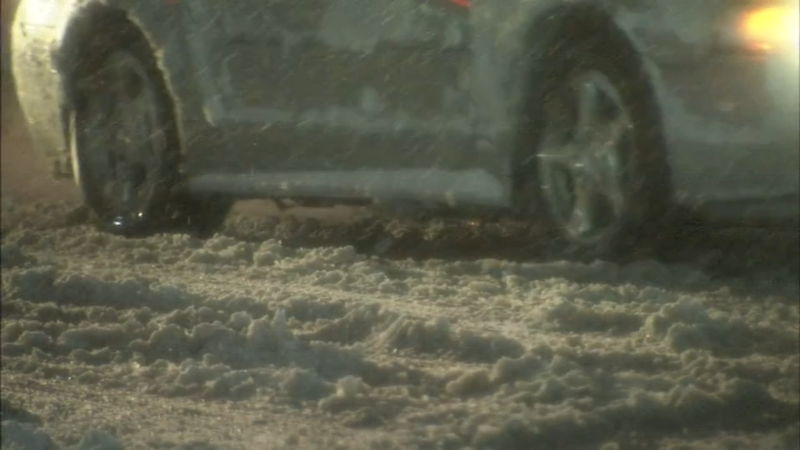 HAMILTON TWP., N.J. (WPVI) -- State and local officials are still asking folks to stay off the roads as things could get very slippery Wednesday night.

As the snow was still falling, we found folks trying to stay on top of it and hoping this is the last of it.

It took Carlos Cardero about an hour to clear off his walk and his vehicle in Trenton - but he says it'll be worth it tomorrow.

"I clean the front of my house, I clean my car. Tomorrow it'll be nice and clean," said Cardero.

He and others are trying to beat the freezing temperatures expected overnight.

Plow crews came through as the snow started to stick in the evening hours. On Route 33 in Hamilton Township road conditions started to deteriorate, according to drivers.

Stephanie Tosado of Hamilton Twp., New Jersey said, "I got home around 2:30-3 o'clock because they let us go early but it was actually pretty bad when I left work."

Heriberto Hernandez of Hamilton Twp. Said, "My car is four wheel drive and it's sliding. So I can imagine a regular car."

For snow removal crews - it's been a busy day... and it'll likely be a long night.

Nick Piest from Penn Snow Removal said, "We'll probably be going until late tomorrow morning. Because a lot of people have work in the morning so they want us to be finished before the morning to get out."

Back in Trenton, beach season may be a few months away, but Lindsay and Lenny Deleon - ages five and two, put their beach toys to good use. And they may have had a snowball fight or two.

And in all the snow and slush. we managed to find one person who loves this weather.

Dominique Delleh of Trenton, NJ said, "I'm not over it just yet because we're about to hit summertime. So it's kind of nice."

There's still plenty of digging out to do.

Trenton public schools have announced they'll be closed again Thursday because of the snow.