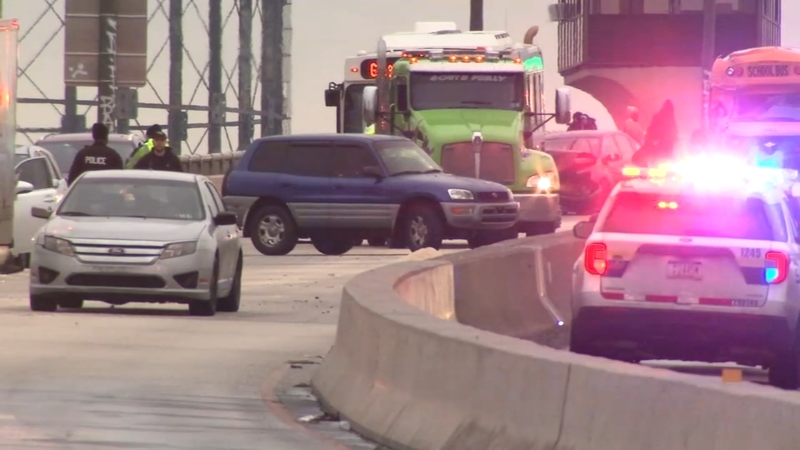 19-car pileup on Passyunk Avenue Bridge due to icy conditions

PHILADELPHIA (WPVI) -- Nearly 20 vehicles were involved in a pileup on the Passyunk Avenue Bridge in Philadelphia as the Delaware Valley dealt with icy conditions during the Wednesday morning commute.

It happened around 6:30 a.m. on the bridge in Southwest Philadelphia.

The crash involved 19 vehicles in total, including a SEPTA bus and a school bus, authorities said.

Two passengers were onboard the SEPTA bus. At least one was transported to the hospital with non-life-threatening injuries, according to a SEPTA spokesperson.

19-vehicle pileup involving a school bus and SEPTA bus on the Passyunk Avenue Bridge in Southwest Philly. No students onboard the school bus. Driver is ok. @6abc pic.twitter.com/xCTIl6Hdtk

Some involved in the multi-vehicle collision complained of bumps and bruises, but there have been no reports of serious injuries.

Action News was on the scene as the Philadelphia Streets Department was salting the bridge.

Lanes remained closed in both directions for hours after the crash. The bridge reopened around 9 a.m.

UPDATE: The Passyunk Avenue Bridge has been salted and is now back open to traffic is both directions after 19-vehicle pileup. @6abc pic.twitter.com/YN6FRHHxrO

Most of the Delaware Valley was under a Winter Weather Advisory on Wednesday morning. The National Weather Service said chances of freezing rain could result in very slippery conditions on sidewalks, roads and bridges.