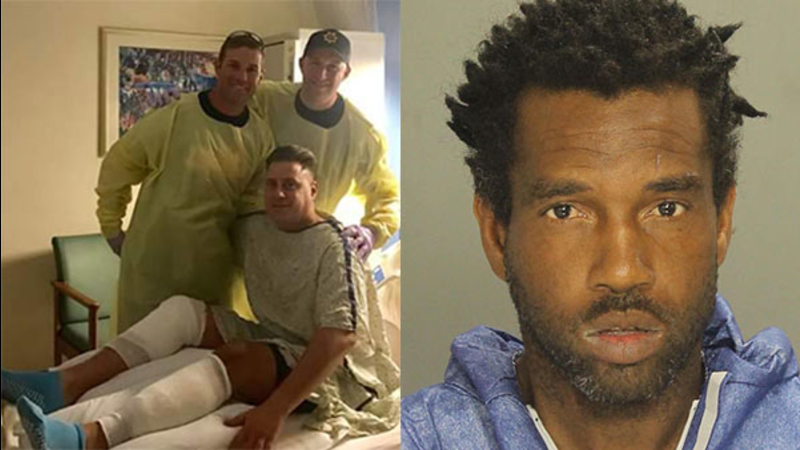 COLLINGDALE, Pa. (WPVI) -- A suspect accused of throwing a firebomb at law enforcement serving a warrant was arraigned Thursday in Collingdale, Delaware County.

Jeromy Jones, 39, has been charged with attempted first degree murder and assault on a law enforcement officer and other related charges. Following arraignment, he was taken to the George W. Hill Correctional Facility after failing to post $1 million cash bail.

Police say Jones wore a blue suit because his clothes were covered in gasoline.

"I didn't mean it. I didn't do - what you call it? I don't even know what's going on. I really don't. I'm not supposed to be talking to anybody," Jones said as he was being escorted away by authorities.

Sergeant Nick Maraini was taken to the hospital with second and third degree burns to his legs. He was released Thursday afternoon and is now recovering at home.

Jones was led in and out of court wearing Maraini's cuffs and shackles.

"His life was truly in danger. He's very, very lucky, and we're all very lucky, that he's still here. I think it's very significant that it's used to honor him," Delaware County Sheriff Mary McFall Hopper said.

Sheriff Hopper and Collingdale Police Chief Bob Adams stood with more than a dozen members of law enforcement in the courtroom.

"They're the unsung heroes. They do this every day and they don't know what they're getting into behind that door. They have no idea," Adams said.

They knocked on the door multiple times, identified that they were from the sheriff's department, but no one answered.

As they were walking away from the door, police say Jones threw a flaming bottle at Sgt. Maraini, setting his feet on fire. His partners jumped into action, helping him put out the flames.

"This coward, from behind a closed door, opened it and threw a bomb at five unsuspecting young men who were doing their job trying to keep streets clean and the community safe. How do you defend yourself when you have a bomb thrown at you? You can't," Adams said.

After a standoff that lasted an hour, Jones surrendered.

Six more combustibles were recovered from inside the home.

One nearby resident came to court Thursday morning to show her support for her neighbor.

"I think that he has mental problems. I think that's what triggered it," neighbor Lorri Mooney said.

Jones remains in custody. His next court date is August 22nd.

The judge has ordered a competency evaluation before that date.