Gas prices in Pennsylvania went up six cents overnight, and 48 cents in the last week.
WPVI
By Jillian Mele 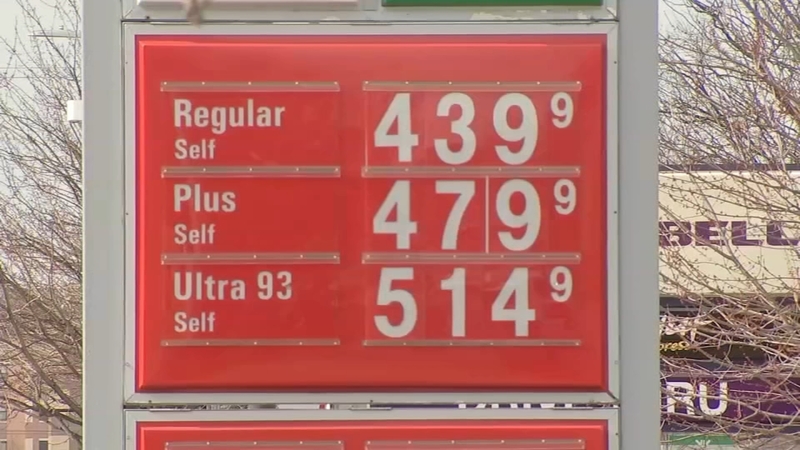 The war in Ukraine is sending the cost of fuel to levels not seen in more than a decade in the Philadelphia region.

Gas prices in Pennsylvania went up six cents overnight, and 48 cents in the last week.

People in this area are starting to think more about long-term solutions, and energy independence. But for now, they are just trying to keep up.

"Any fuel that keeps anything moving, we're going to see those prices. Unfortunately, those price increases will be passed along to consumers," said AAA spokesperson Jana Tidwell.

It's the same story everywhere: people are just trying to keep up with the constantly changing gas prices.

According to AAA, the average price for a gallon of regular will cost you $4.30 in the Philadelphia area, with Montgomery and Delaware counties coming in at the top at $4.31.

That's higher than Pennsylvania's average, which is $4.23 per gallon as of Monday.

Still, many people said they would rather pay more at the pump to be less dependent on Russia for oil.

"My honest answer is yes. I think Germany and the US should cut their ties with the Russian oil," said Dave Uyger of Bala Cynwyd. "For the time being, I think it would be a reasonable sacrifice to pay more at the pump and maybe lower other local taxes in each county."

"I would support Ukraine. I want to be energy independent anyway. If it means cutting off - at some point you have to do it," Cooper said. "I say go ahead and cut it off now and support Ukraine."

The White House indicated on Monday that it was considering a ban on Russian oil, but what would that mean for us here at home?

We asked Chris Lafakis, the director of climate and energy economics at Moody's analytics.

"I think that the US could do it. I think it's going to be much more difficult for Europe to do it because about 40% of the natural gas that Europe imports comes from Russia," he said.

Lafakis added that Russia produces roughly 10 percent of the supply of global oil, and says there are three ways the US could become less dependent on them.

"You can look at 3 alternatives," he said. "One, we would ask Saudi Arabia to pump more; Two, U.S. shale extractors, frackers, could step up to the plate. The third alternative is really to rely on your inventories in the meantime."

Lafakisadds, if there was a coordinated ban on Russian oil, the price of a barrel of crude oil could possibly spike to the $150 range for the first time since July of 2008.

Lafakis says that has a direct correlation to what you're paying at the pump.