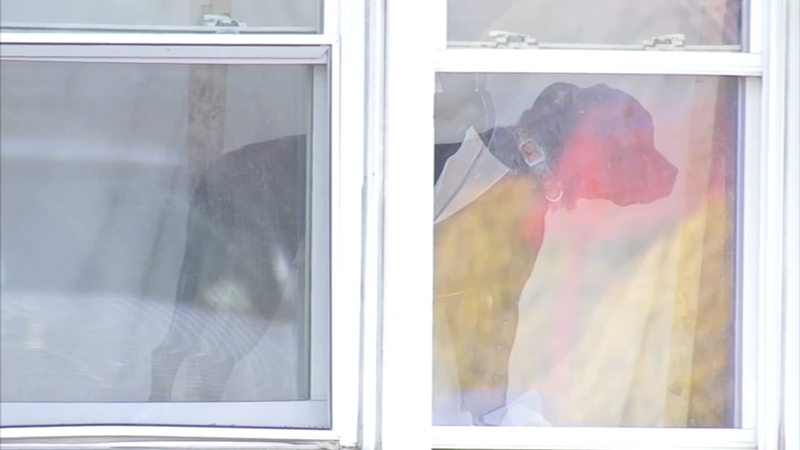 NORTHEAST PHILADELPHIA (WPVI) -- Philadelphia police say they had to discharge their weapons after the same two pit bulls that killed a dog two weeks ago attacked again.

It happened around 7:20 p.m. Monday along the 1900 block of Goodnaw Street in Bustleton when police responded to a report of two dogs attacking a woman and her dog.

Two officers arrived at the scene and shot at the dogs, striking them, in an effort to stop the attack.

The woman, who asked only to be identified by her first name Kate, said she was walking her mother's bichon frise, Weenie, when the attack occurred.

"My mom was sitting on the pavement, holding Weenie, covered in blood," Kate said.

It was approximately two weeks ago that Jason Colucci, another resident on the block, shared his story about the same dogs getting out and killing his beloved dog Champ.

In addition to killing Champ, the dogs also bit Colucci, as well as his landlord.

Colucci said he was told the pit bulls would be quarantined for a week. Police say they found out that the dogs were only held one day.

"I can't believe the same thing happened again after we called numerous times to try to get these dogs out of here," said Colucci.

Animal Care and Control said the agency cannot legally remove dogs from their owners because they were never charged with a crime after the first incident.

In a statement, they said: "With regard to the first bite incident, the dog owner appears to have complied with the bite quarantine procedures as required by law."

Kate says that is no consolation for her family.

Police said they have been out to the home more than two dozen times to try and find the owners of the pit bulls to serve them a dangerous dog citation, but no one ever answered the door.

The officer-involved shooting investigation will also be looking into charges for the owner of the dogs.

Police fire at two pit bulls attacking woman and her dog as reported during Action News at 11 on January 7, 2019.