The shooting happened on the 2300 block of North Reese Street in North Philadelphia.
WPVI
By 6abc Digital Staff and Dann Cuellar 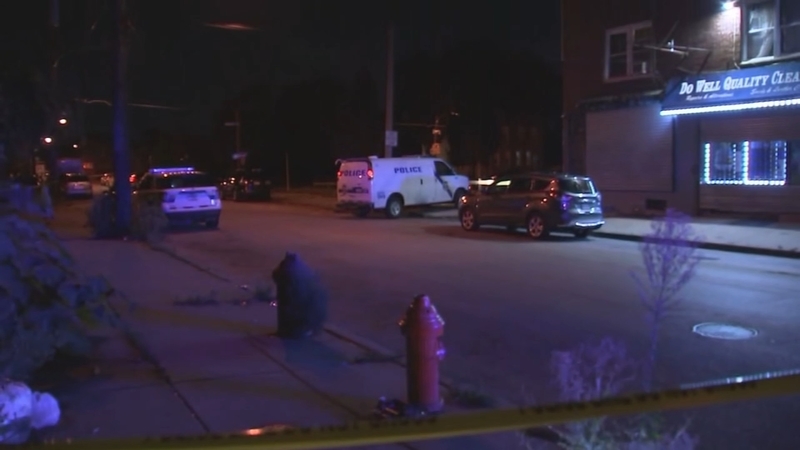 PHILADELPHIA (WPVI) -- A police officer was shot in North Philadelphia while responding to a call for a reported carjacking on Monday night.

It happened around 8 p.m. on the 2300 block of North Reese Street in North Philadelphia.

Police say a woman was carjacked on the 2500 block of Aramingo Avenue and she tracked her vehicle to North Reese Street. Officers were fired on when they got to the scene.

"When they responded to what they believed was... the victim's vehicle, without warning the officers were actually shot at," said Police Commissioner Danielle Outlaw.

Sources say possibly two suspects began firing at the officers. As many as 16 shots were fired at before the suspects fled on foot.

The 28-year-old male officer with the 24th Police District was in full uniform at the time of the shooting. He suffered a graze wound to the head. No other officers were injured.

#BREAKING Sources say officer is very lucky in that he only suffered a graze wound to the head. @6abc pic.twitter.com/vX0PCWOwG7

Action News learned late Monday night that the injured officer was released from the hospital. He's been with the department for four years, and his father is a longtime homicide detective.

One person was arrested for illegal possession of a firearm. It's unclear if this suspect is connected with the shooting at this time, but more arrests are likely.

“He’s in great spirits.”- Police Commissioner Danielle Outlaw speaks after officer on the job for 4 years is grazed in the head by a bullet. He was responding to a carjacking call in North Philadelphia. @6abc @PhillyPolice @PPDCommish #Philly #Police pic.twitter.com/z4tc4d3ODg

This isn't the only incident Monday night in which officers were fired on in the city.

Police officers were pursuing a Delaware County shooting suspect when he allegedly fired at Folcroft officers and then stole a police cruiser. He then led officers into South Jersey where he was taken into custody after shooting an officer while being apprehended.