President Joe Biden spoke about his history with the university before reminiscing on his academic career.
WPVI
By Beccah Hendrickson and 6abc Digital Staff 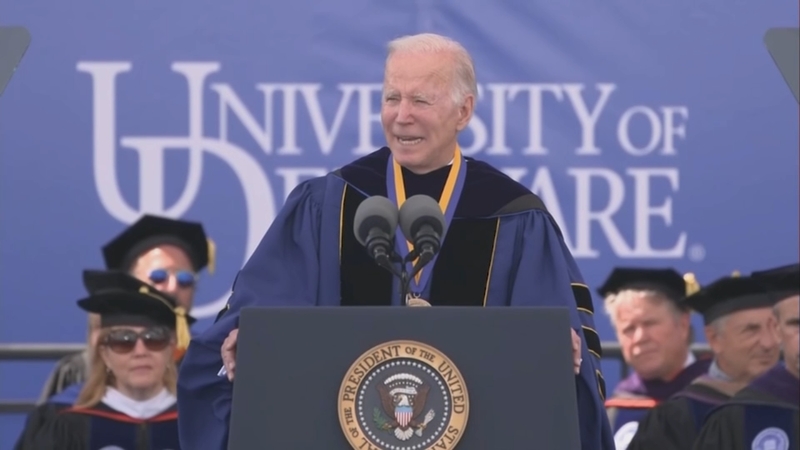 To the class of about 6,000 graduates, both undergraduate and graduate, Biden compared this moment in time to when he graduated in 1965 during the Civil Rights movement, which he called an "inflection point in history."

"I believe that with every fiber of my being, this is a decisive decade for America at a time where we can choose the future we want," he said.

He told the graduates that choice is up to them, and he called for unity.

"Progress comes when we begin to see each others not as enemies, but as neighbors,' Biden added.

Biden spoke about his history with the university before delving into politics and reminiscing on his academic career.

"It feels like coming home because this is home. I once walked this campus as you did," he said.

He then continued to talk about problems facing America, from the COVID-19 pandemic to recent mass shootings in Buffalo and Uvalde, Texas, where 19 kids and two teachers were killed.

"Too much violence. Too much fear. Too much grief," Biden said.

Some graduates called his speech inspiring.

"I know that my class is the best generation, and I agree with everything he said. I think we're going to do a great job in the world and make some good changes," said Lauren Carini.

Ryan Moylan added, "I thought it was pretty cool he went to school here, so it added a little more effect to the speech, made it a little more personal to think he was in our shoes."

Others thought it became too political.

"I thought it started off really good when he was talking about the students, and then he started talking about politics, and I feel like some kids got lost," said Katie Kile.

Regardless of opinion, Biden told the graduating class he has faith in their future.

"Your generation is the most generous, the most tolerant, the least prejudice, the best education generation this country has ever seen. That's a simple fact," said Biden.