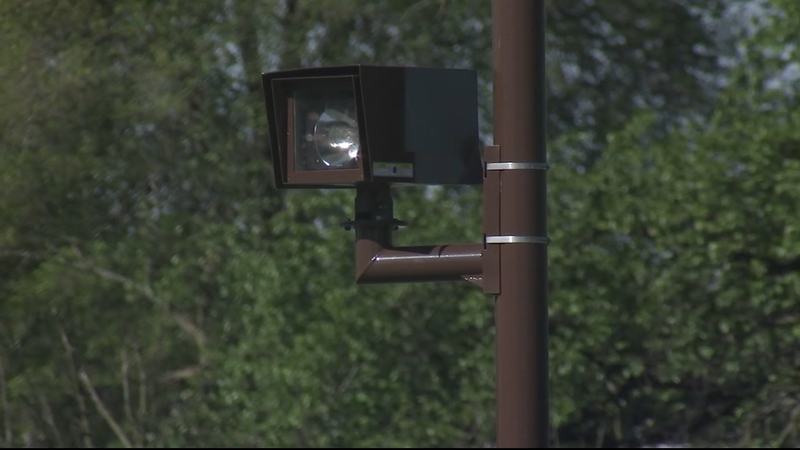 PHILADELPHIA (WPVI) -- The Philadelphia Parking Authority released its annual report Wednesday on the use of speed cameras along the Roosevelt Boulevard.

"Since the program's implementation, there has been a substantial reduction in the number of vehicles traveling above the posted speed limit," the 35-page report said.

There are currently 32 cameras positioned at eight locations along the notoriously busy and sometimes dangerous road.

The cameras were activated in June 2020 to collect data during a 60-day warning period, with fines beginning in August 2020.

There are eight cameras installed along the Roosevelt Boulevard and starting Saturday if you're caught driving 10 miles over the speed limit, you'll be mailed a fine.

During the first month of the warning period in June 2020, the PPA mailed 224,206 violation warning notices to speeding motorists.

"As the program continued, driving behaviors changed and vehicles began to slow down, resulting in a 93% decrease in violation issuance," the report said.

Data collected during the warning period revealed what others have experienced- some drivers use Roosevelt Boulevard as a race track. Many were photographed traveling at speeds of more than 100 mph, according to officials.

The report said in August 2020, the first month of violations with fines, violations decreased to 84,608.

The number of vehicles speeding in excess of 100 mph during the 60-day warning period was 75, the report said. That number was reduced in the following seven months, with seven vehicles recorded over 100 mph in February 2021.

Based on the data, the PPA recommends the presence of law enforcement between 8 p.m. and 4 a.m. along the Boulevard, saying that "could potentially address excessive speeding during a critical period."

They also recommend additional cameras along the roadway, as well as a traffic signal between Strahle and Woodward streets.

Scott Petri, the Philadelphia Parking Authority's executive director, said, compared to other cities, Philadelphia had a higher rate of speedsters on the Boulevard during the warning period.

Anyone photographed by the cameras going more than 10 mph over the speed limit will be mailed a ticket of up to $150 to the address the car is registered to.

Drivers who are ticketed will not have any points added to their driving record.

Some people have a real issue with the speed cameras and argue that the devices are a way for the city to make money. But city leaders insist that using the cameras is about saving lives.

"The fine is aimed at deterring driving at excessive speeds that could lead to fatal accidents and injuries," Petri said.

Officials are pointing to New York City as an example. Speed cameras installed there between 2014-2017 reportedly reduced speeding by 63% and lowered the number of fatal crashes by 55%.

In its report, the PPA recommends a targeted public campaign designed to educate drivers of the risks and dangers of excessive speeding.