Before he was principal, Jonathan Wisneski was a teacher in the Upper Darby School District.
WPVI
By 6abc Digital Staff and Dann Cuellar 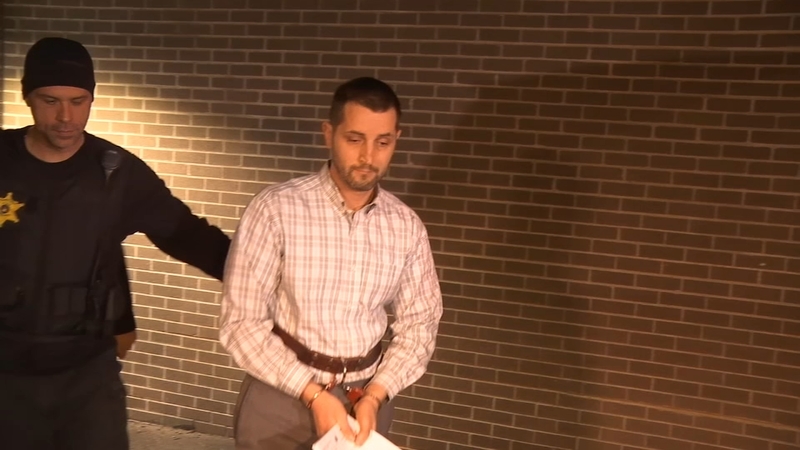 UPPER DARBY TWP., Pennsylvania (WPVI) -- Delaware County officials have announced the arrest of a former principal who is accused of sexually assaulting a student.

Police say 43-year-old Jonathan Wisneski, former principal at Primos Elementary in Clifton Heights, assaulted the student when he was principal at the school. He left the school in 2018.

"Did some forensic interviews of a victim, and with these, we are now bringing charges against Mr. Wisneski," said Upper Darby Police Superintendent Tim Bernhardt.

Before he was a principal, Wisneski was a teacher in the Upper Darby School District.

His most recent employer is Devereux CARES (Center for Autism Research & Educational Services) in Downingtown, Pa.

A spokesman for the company says he was placed on leave Friday after learning of the charges.

The superintendent of the Upper Darby School District says allegations were made four years ago.

A forensic expert who interviewed another child also came forward with similar allegations.

"It's sickening, my son is non-verbal, and I don't know if he was ever in the situation alone," added mother Jessica Stromberg, whose autistic son was 8-years-old when Wisneski was the principal at Primos Elementary.

Stromberg says she was suspicious when the school district suddenly got rid of Wisneski and replaced him with someone else.

"It's almost like it's hush-hush. It was swept under the rug," she said.

The incident happened before Dr. Daniel McGarry was named Superintendent of the School District.

"It's unfortunate when you're given an opportunity to work with children that anybody would take this for granted. I'm kind of heartbroken to be here today for those kids or anybody that's been involved in this situation," said McGarry.

Delaware County District Attorney Jack Stollsteimer added, "We have no tolerance for people who prey on our children, we will hunt you down, and we will bring you to justice."

He was arraigned and is being held on a $150,000 bail.
The following letter was sent to families in the Upper Darby School District:

I wanted to provide you with information on the recent arrest of a former Upper Darby School.

District employee, Mr. Jonathan Wisneski. First, I want to be clear that Mr. Wisneski is not a current employee of the Upper Darby School District and has not been for some time.

Four years ago, some allegations were made about Mr. Wisneski's interactions with staff and students. The Upper Darby School District investigates all such allegations and, as always, we followed our internal processes and procedures for handling such complaints either from a student, staff member, or parent.
The Upper Darby School District completed all required reports and documentation with appropriate county and state agencies and the Upper Darby Police Department. The School District addressed this personnel matter appropriately with the information we were provided after a full investigation and input by all parties.

Recently, I have learned of new information obtained by Children and Youth Services (CYS) and the Upper Darby Police Department, and that they are acting on that new information.

My office has been fully cooperating with Upper Darby Chief of Police, Mr. Timothy Bernhardt, and we will continue to do so.