Jersey Shore begins to dig out after blizzard 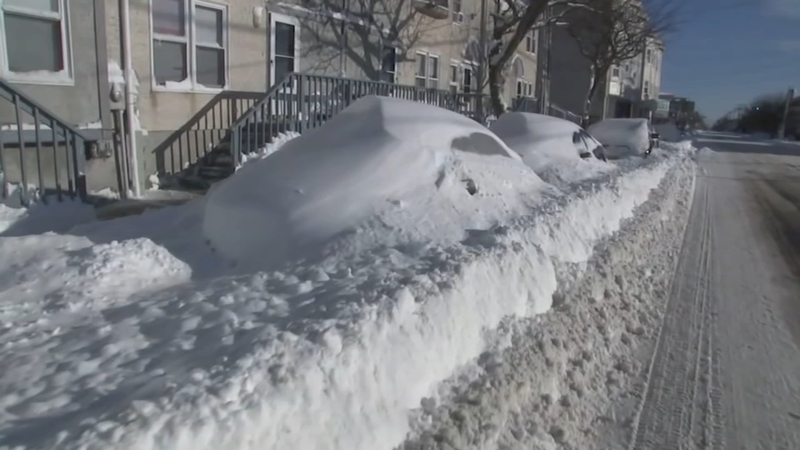 Jersey Shore begins to dig out after blizzard

LINWOOD, New Jersey (WPVI) -- A massive cleanup effort is underway at the Jersey Shore after a weekend blizzard dumped up to 19 inches of snow in some places, like Linwood, New Jersey.

"Just making sure you can open the front door at this point," said Anthony Tull, who spent an hour with his dad digging a truck out of their driveway.

The work is far from over. They want a safe path out of their home, but it's hard to do with the cold temperatures leaving a layer of ice under the snow.

"You know before it all freezes over too hard. Get it while it's nice and powdery still," he said.

Off Route 9, Karen Ogborn says a plow truck came and cleared out her home once, but another truck came through to take care of the roads and coated her driveway again.

"This morning when I came through, I was a little afraid I was going to take off the front end of my car making it down the driveway," she said.

He has plowed 20 parking lots so far and still has eight more to go.

"Plowing a lot, which is not easy moving 18 inches of snow. Once you move the path once, now you're moving 30 inches of snow. Luckily, it's a powder so it's not too bad today," he said.

As South Jersey and the shore dig out after the blizzard, emergency officials in Atlantic City say they're proud of the response, but are warning people that it's still dangerous outside. Crews are still working to clear the roads, and the more people that are out, the harder it will be to work.

"We experienced our first blizzard for 2022, let's hope it's the last one. Although the snow has stopped, the hazards haven't stopped," said Scott Evans, the Atlantic City Emergency Management Coordinator.