See the full pregame tribute and halftime performances in the story below
ESPN
LOS ANGELES -- Just over 25 minutes before a game unlike any other ever played at Staples Center tipped off, a celebration of Kobe Bryant began.

There were two moving and powerful video tributes, and R&B artists Usher and Boyz II Men, and cellist Ben Hong performed, followed by an emotional LeBron James addressing a crowd for the first time since Bryant's death Sunday. Then the Los Angeles Lakers' entire starting five were introduced one by one as "Kobe Bryant" while wearing either Bryant's No. 8 or No. 24 Lakers jersey before playing the Portland Trail Blazers on Friday night.

Standing on the Lakers logo at center court facing No. 8 and No. 24 wreaths, James read off all the names of those who died in Sunday's helicopter accident: "Alyssa Altobelli. John Altobelli. Keri Altobelli. Payton Chester. Sarah Chester. Christina Mauser. Ara Zobayan. Gianna Bryant. And Kobe Bryant."

And that was the only script James stuck to before pointing to notes he had on him and tossing them to the floor.

"I got something written down, they asked me to kind of stay on course or whatever the case may be," James said, sniffling after the emotional tributes. "But Laker Nation, man, I would be selling y'all short if I read off this s--- so I'm going to go straight from the heart."

"Tonight we celebrate the kid that came here at 18, retired at 38 and became probably the best dad we've seen over the last three years.” pic.twitter.com/0sS7e91cuz

The Staples Center crowd, seemingly every single person standing in the building, erupted into a thunderous and what felt like therapeutic applause as James continued.

"Now I know at some point, we will have a memorial for Kobe," James said. "But I look at this as a celebration tonight. This is a celebration of the 20 years of the blood, the sweat, the tears, the broken-down body, the getting up, the sitting down, the everything. The countless hours, the determination to be as great as he could be. Tonight, we celebrate the kid that came here at 18 years of age, retired at 38 and became probably the best dad we've seen over the past three years, man.

"Tonight is a celebration."

The Lakers and their grief-stricken fans returned to Staples Center uncertain of how to feel Friday night, just five days after Bryant, his daughter and seven others died in a helicopter crash in Calabasas, California.

The Lakers lost the game 127-119, but that was almost an afterthought. After a week full of tears, it became clear that the organization, its employees, players and fans needed this moment to come together and cry, as many did in the stands and on the floor, to smile and cheer again at Bryant's legendary moments played throughout the night and to remember and mourn the nine victims lost in a tragedy that has left Los Angeles heartbroken.

"Man, this week, I cried a lot, laughed a lot," said forward Kyle Kuzma, who grew up idolizing Bryant before getting to personally know him these past few years. "Probably cried so much I didn't really have that many more tears [left]."

No one really knew what to expect coming to the arena, the place Bryant called home for nearly two decades.

Hours before the game -- which featured the nearly 30-minute pregame tribute and a halftime performance by rapper Wiz Khalifa, with Charlie Puth on piano, delivering a stirring rendition of their hit, "See You Again" -- staff members and Staples Center employees could be seen hugging and talking to one another. The franchise has been devastated since the team learned of the news on the cross-country flight home from Philadelphia on Sunday afternoon.

When I See You Again pic.twitter.com/QuPt6NgZv1

Rob Pelinka, vice president of basketball operations and general manager, could be seen walking around the hallways and being greeted by people offering him their deepest sympathy. Pelinka was Bryant's best friend, longtime agent and godfather to Gianna.

"The first thing that came to mind, man, is all about family," James told the crowd. "As I look around this arena, we're all grieving. We're all hurt. We're all heartbroken. But when we're going through things like this, the best thing you can do is lean on the shoulders of your family. And from Sunday morning all the way to this point -- and I've heard about Laker Nation before I got here last year, about how much of a family it is -- and that's absolutely what I've seen all week."

Everywhere in the arena, there were reminders of Bryant. Inside the Lakers' locker room, a Bryant No. 24 jersey hung on a fire alarm next to James' locker, which was Bryant's former locker stall. James had several pairs of Bryant's signature Nike sneakers in front of his locker from which to choose. He wore an unreleased pair of Kobe 5 Protro "Big Stage/Parade" sneakers to the Lakers' morning shootaround.

Above the court up in the rafters, all of the Lakers' retired uniforms were covered by a black cloak except for Bryant's No. 8 and No. 24. On the court, there were decals affixed to the hardwood representing both of Bryant's numbers as well as the special KB patch.

“Growing up and watching all these great players play and learning so much from them, to now be a part of that wall means everything to me.” pic.twitter.com/MEOqu3PZcG

Lakers coach Frank Vogel and staff members wore a pin with the special KB logo. Every seat in the building was blanketed with gold T-shirts with "Bryant 8" on the front and "Bryant 24" on the back -- the same shirts Lakers players wore while warming up before the game.

But there were two empty courtside seats that stood out. Where Bryant and Gianna sat courtside across from the Lakers bench for a game on Dec. 29 against the Dallas Mavericks, there was a black Mamba Academy No. 2 uniform for Gigi and her father's gold No. 24 Lakers uniform draped on the seatbacks. A bouquet of red roses rested on each seat.

"This week has been about life more than basketball, wins and losses," Vogel said after the loss. "... Definitely the heaviest game I've been a part of."

Everything was different about this Lakers home game, the first since Sunday's tragedy after Tuesday's game between the Lakers and Clippers was postponed. Prior to James' emotional speech, the lights were dimmed inside the arena more than an hour before the game, which was unusual. The typically late-arriving L.A. crowd had the venue filled over an hour before the game began. And when the lights came back on, the Lakers players, donning Bryant No. 8 and No. 24 jerseys, jogged onto the floor for their layup line to loud cheers.

Lakers Head to the Court

After the first warm-up, the lights turned off and then Usher, standing at a microphone in front of No. 8 and No. 24 wreaths made of yellow flowers, sang "Amazing Grace" as a video played on the big screen of the outpouring of grief from the sports world for Bryant. The sea of fans stood and held their phones up to record the moment. After that, the lights turned off again and "Kobe" and "Gigi" chants echoed through the building.

When the lights came back on, Hong played "Hallelujah" at center court as another video played, featuring Bryant speaking in previous interviews over highlights from his life. The crowd watched the entire spectrum of Bryant's joy and pain through scenes of him rehabbing and training, winning championships with Shaquille O'Neal, celebrating Olympic gold with James, winning his Academy Award, and showing his love for his wife, Vanessa, and his four daughters. The Lakers and Blazers sat in their seats on the bench watching

There was a 24.2-second moment of silence in honor of the uniform numbers of Bryant and his daughter.

24.2 seconds of silence for all the victims of Sunday’s tragedy pic.twitter.com/zKVeUXcNPS

Boyz II Men, who hail from Bryant's hometown of Philadelphia, sang a stirring rendition of the national anthem.

James and some of his teammates had their arms around one another, and fans could be heard sobbing in the stands. Vogel would later say that his players walked to center court for the tip with tears in their eyes.

"It's going to take a while," Lakers veteran Jared Dudley said of how long the Lakers will need to get over this. "It is not just a one game, two game, or two or three weeks. And maybe it's next year."

A wistful James finished his postgame news conference Friday by focusing on the perspective Bryant's death provided and noting how "these last three years were the happiest I've ever seen him" in retirement spending more time with his family.

Bryant, of course, defined himself by his countless accolades and championships in his pursuit of basketball perfection. James has mirrored his path and chase for greatness. But Bryant's death has worked to emphasize James' instincts to keep his priorities in better balance.

He reiterated how he had no regret going to see his son, Bronny, play with Sierra Canyon in a high school game in Springfield, Massachusetts, on the same day that the Lakers played and lost 139-107 at Boston on Jan. 20.

"When you're playing this game of basketball, we give so much to it," he said. "This is my 17th year so I know. You give so much to it where, unfortunately, your family comes to the wayside at times. Because when you want to be great at something, when you want to be the best at something, you become so driven that you won't let nothing stand in the way of that. Not even your own family sometimes.

"At the end of the day when y'all punch your clocks ... just make sure you hug the s--- out of your family."

On this night, for the first time since the tragedy, the Lakers and their fans were able to put their arms around one another and grieve together in the building where Bryant had brought so much joy.

"The fact that I'm here now means so much to me," James told the crowd in his pregame address. "I want to continue along with my teammates, to continue his legacy, not only for this year, but for as long as we can play the game of basketball that we love because that's what Kobe Bryant would want. 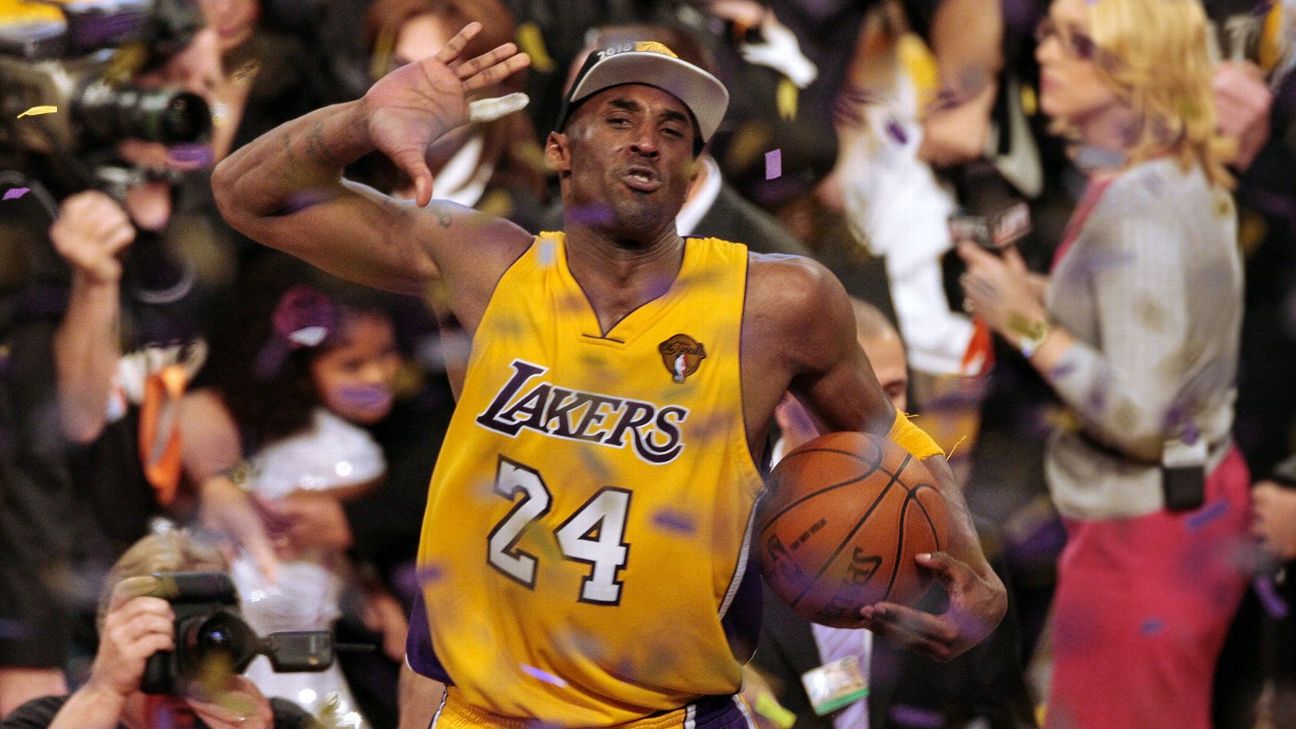