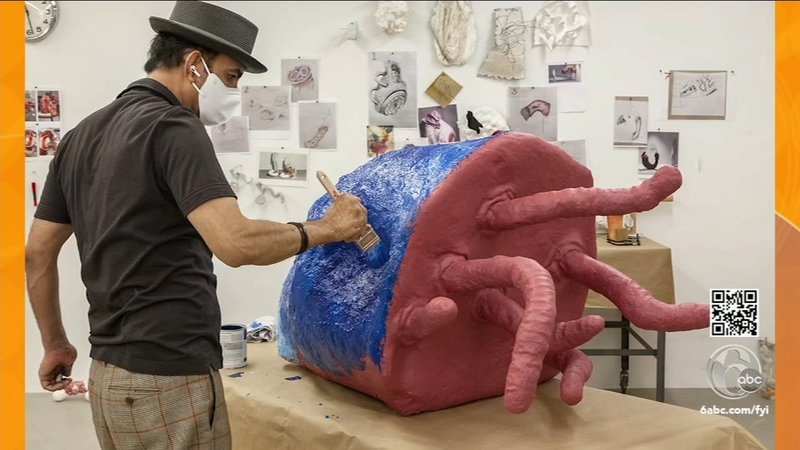 PHILADELPHIA (WPVI) -- The Fabric Workshop and Museum has a new exhibition by an Iraqi emigre who uses his art to tell the story of the trauma of war.

The exhibition, created by Ahmed Alsoudani, is called Bitter Fruit.

It reflects Alsoudani's experience fleeing Iraq during the Gulf War in the early 1990s.

"There's this really beautiful, poetic connection, between all kinds of organic forms, and how we experience that kind of trauma," says Christina Vassallo, the Executive Director at the Fabric Workshop and Museum.

The exhibition is a collaboration between the artist and the museum.

"Unlike many museums that simply display the artwork, we help produce it," says Vassallo.

The magic unfolds at their on-site studio...

"We bring ideas, we bring skills. We have a wood shop, a screen-printing facility, a dye room," says Lawrence.

"A lot of that has to do with material exploration," says Vassallo.

"This is one of the first objects that we sculpted for Ahmed," says Lawrence, "The process was inviting Ahmed to send sketches of dream objects that he would like to build.

Then, the studio constructed the 3D model.

"He would paint it on top of it, send it back to us and then, we would respond," says Lawrence.

"It can also have a very strong message beneath the surface," says Vassallo.

The show is named after the 1937 anti-lynching poem originally entitled Bitter Fruit.

The artist uses strange forms to show how war can damage bodies and impact society.

"When trauma is introduced to growing organisms, like plants...their fruit can taste bitter," says Vassallo.

"They're, at times above you, on top of you. It'll just be an exciting way to explore art objects to really feel like they're alive," says Lawrence.

Bitter Fruit runs through May 1st with interactive workshops available.