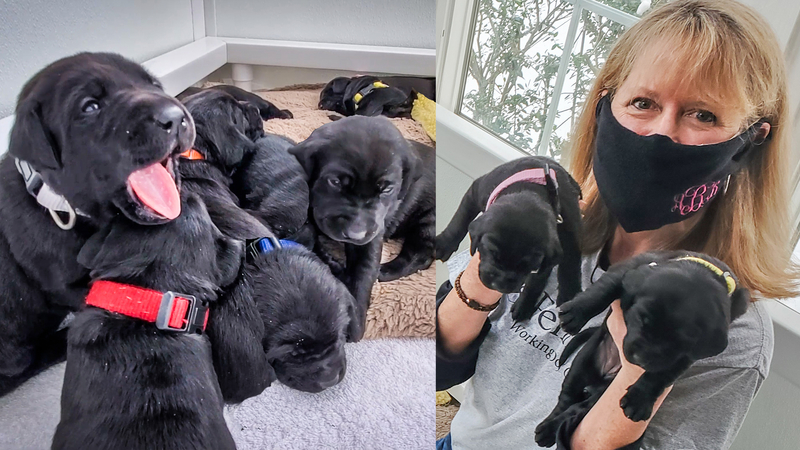 "When you foster dogs, it's like sending a child to college," said Alice Barnhart. "You get them ready and they're so ready to go."

"There are seven girls and one boy," said Alice. "They were born in that box."

"Of course you grow very, very fond of each other," said Alice. "But they're off to do great things and literally save lives."

Dogs who train with Penn Vet learn how to detect drugs and explosives. They can also use their sense of smell to find trapped or buried humans.

But that's not all they are capable of doing.

"We saw that part of the program was that you could actually foster and take a dog in that might actually someday sniff out Ovarian cancer," she continued. "And we both said we want in."

It was a personal commitment that guided the Barnharts' decision to train to become a foster family.

"My mom was very sick with Ovarian cancer in 2009," Alice said. "We knew that we wanted to do something after she passed away. She would want us to get involved."

Penn Vet hopes to prove that dogs can even sniff out COVID-19.

"These dogs are a tremendous asset to anybody in the service world," said Annemarie DeAngelo, a retired Major with the New Jersey State Police.

DeAngelo was part of the team that started the ever-growing K9 unit for the state's police force. Now, she is the K-9 Training Director for the Penn Vet Working Dog Center.

40 years later, it seems like she pulled it off.

"I've been so lucky. I'm so blessed. I've been playing with dogs most of my life," she said.

DeAngelo says the Working Dog Center was inspired by the dogs that responded to the horrific attack on 9/11.

"They searched for the survivors at both the Pentagon and the World Trade Center, and then, they also searched for people that did not survive," she said.

Like the dozens of dogs before them, each puppy in this litter is named after someone who lost their life on September 11, 2001. Vig, Vauk, Vara, Vaz, Victoria, Villa, Vita and Vega recognize victims whose names begin with the letter, "V."

"To see them come in as eight-week old puppies and then leave to move on to their careers is very special," said DeAngelo.

To learn more about the Penn Vet Working Dog Center and how to get involved, visit their website.

The baby pitbull, "Thor," was rescued by the Mount Laurel Police Department. One of their officers fell in love and adopted him!