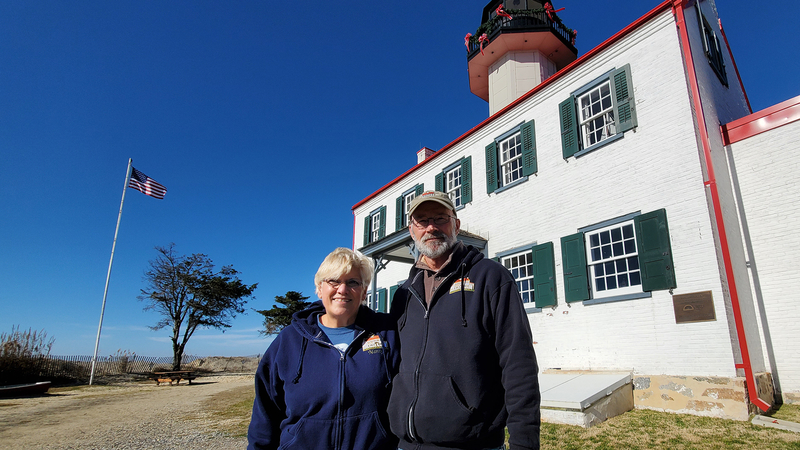 MAURICE RIVER TWP, N.J. (WPVI) -- The East Point Lighthouse spent decades guiding sailors through storms. Now, it is weathering a storm of its own.

"The lighthouse basically is one good storm away from a major disaster," said Nancy Patterson, President of the Maurice River Historical Society. She devotes her life to protecting New Jersey's second oldest lighthouse, which is still active to this day.

Patterson and her husband, Carl Tidy, spent time painting the staircase of the 171-year-old lighthouse this morning. But that was the least of their problems.

On a gorgeous day with low tide, the Cape Cod-style house sits comfortably at the mouth of the Maurice River. However, as the tide rises, the river eats it alive.

"The water comes in every day and it just takes part of the point with it each time," said Patterson. "And then it ends up in the basement of the building."

Patterson, a lifelong fan of all things nautical, has spent six years communicating with local politicians and the New Jersey Department of Environmental Protection to get help.

Last year, the NJDEP installed a geotube, or a bevy of large sandbags, to mitigate the flooding. While it does prevent wave damage at the lighthouse, it does not stop water from reaching its base.

"The sandbag geotube system that was put in was just meant to be a BAND-AID. There wasn't enough money to complete it," Patterson said. She believes the necessary step is building a sea wall.

But the fight does not stop there.

"The historic East Point Lighthouse is a gem that our community cannot afford to lose," Senator Testa said in a statement made to 6abc. "It is a priority of mine to ensure it can be visited by generations to come."

The Senators are having conversations with the NJDEP Commissioner to secure more help for the community's beloved lighthouse.

"The Cumberland County community is lucky to have a passionate and tireless advocate like Nancy," Senator Testa said.

Patterson is also seeking the help of Congressman Jeff VanDrew to request federal aid for the lighthouse.

Despite the COVID-19 pandemic, Patterson says that tourism has been safe and strong this year. The museum within the lighthouse is open every first and third weekends of the month. Santa Claus is expected to visit next weekend.

"Even if our efforts don't end the way we hope, we know we were part of trying to do something that was extremely important," Patterson said. "We won't give up. I'll be hanging on the place if it's falling into the bay!"

To learn more about the East Point Lighthouse, visit their Facebook page.

"It's like I went fishing...show off my catch," said Fred Akers after salvaging a dolphin balloon from the Great Egg Harbor River. Community Journalist Matteo takes us there.