Many students said the meaning of this day resonates with them as some honor their grandparents who served.
WPVI
By Corey Davis and 6abc Digital Staff 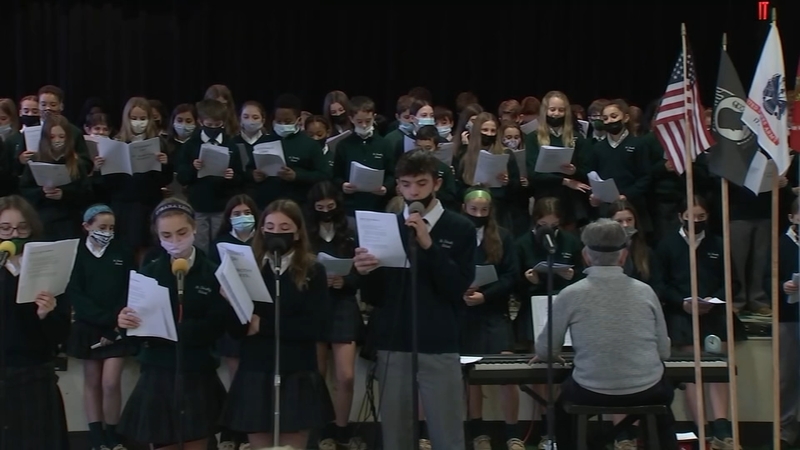 DREXEL HILL, Pennsylvania (WPVI) -- Dozens of students at St. Dorothy School in Drexel Hill, Delaware County, thanked the men and women who served the country by delivering a musical performance for veterans in attendance.

The 5th through 8th graders sang several selections during the Veterans Day ceremony, including songs of each branch of the military.

Veterans stood as they heard their song.

"Today's a proud day. To see the younger generation celebrating what we did when we were coming up, it's pretty nice," said Joseph Kelly, Commander of American Legion Upper Darby Post 214.

Parishioner veterans and members from the community were among those who attended the event Thursday.

"It's awesome that young people want to go into the military. There's a lot to learn, and our history is amazing," said Lisa Kelly of American Legion Upper Darby Post 214.

Many students said the meaning of this day resonates with them as some honor their grandparents who served.

"Being up there singing it makes me think about him all the time, and it means a lot," said 8th grader Gavin McLain.

The gym was decorated in honor of the veterans; it included a wall of honor with pictures and names of veterans.

"My grandfather was drafted into the Vietnam War, and it's a chance to honor him and everyone who fought alongside him," said 8th-grade student Alexandra Cornibe.

The music also came with a deeper message to kids their age, which included urging others to take a closer look and appreciate all veterans.

"I just think it's really important if you see anyone who has a hat on that says they served, just say 'thank you for your service,'" said 8th-grade student Hannah Schumacher.