There have been more than 300 homicides in Philadelphia so far in 2021.
WPVI
By 6abc Digital Staff 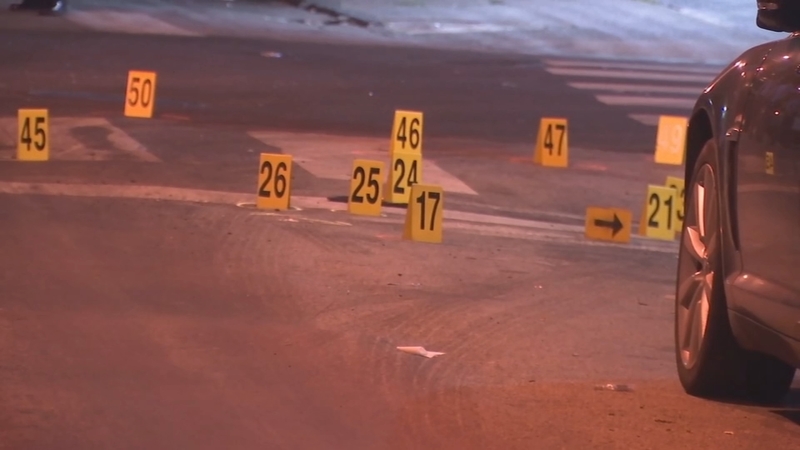 The shooting happened Wednesday around noon on the 200 block of N. 56th Street.

Kaylin Jahad Johnson, 16, was shot multiple times in the chest and stomach. He was pronounced dead at the hospital.

Tommie Frazier, 18, was also shot in the chest and stomach. He was also pronounced dead a short time after arriving at the hospital.

Mayor Jim Kenney wrote a letter to City Council saying he will not declare a state of emergency.

The third victim, a 16-year-old male, was shot once in the left shoulder and is in stable condition.

This shooting adds to the staggering death toll from homicides in Philadelphia, which has left more than 300 people dead so far in 2021.

This year, homicides-to-date, just halfway through 2021, are higher than the full-year totals in six of the past 12 years.

He is just one of a number of voices across the city that have been calling on Philadelphia Mayor Jim Kenney to declare a state of emergency in the wake of gun violence that has reached an alarming spike.

An hour before Kenney was set to address gun violence during a community press conference, reports surrounding the triple shooting was brought to his attention.

But Kenney says he doesn't believe a state of emergency declaration is needed.

"What I think it could do is cause unintended consequences, cause more fear in our community, especially communities of color, already dealing with decades of systemic racism and poverty, which we are committed to getting rid of," said Kenney

The Action News Data team reports that 1,289 people have been shot so far this year in Philadelphia.

"The emergency would bring resources and activities to the community to address things that are happening. Death happens every day in the Black and brown community," said Glasgow.

"It's enough of the BS, those people that are in high positions, they need to exercise their power to do what we need to do to get the people in here to help these communities," said McKendrick.

The mayor says he plans to meet with Pennsylvania Governor Tom Wolf to discuss other plans of action that could be taken to deal with this surge.

Police say there have been no arrests made in connection with the triple shooting.