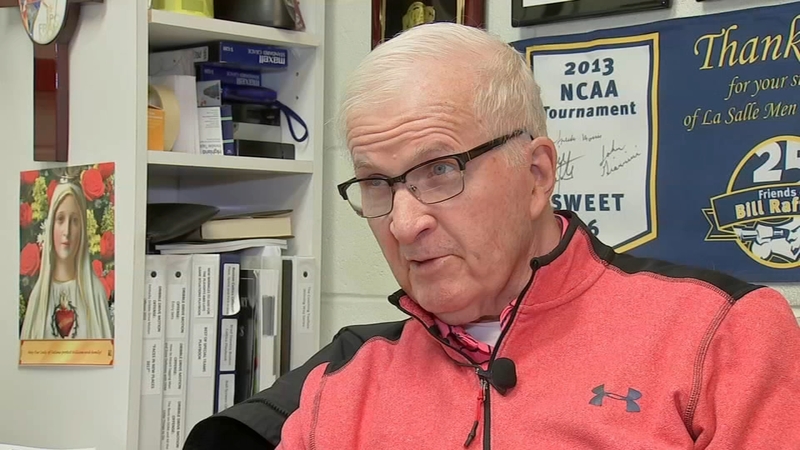 PHILADELPHIA (WPVI) -- After more than a half-century, 52 years coaching basketball, William "Speedy" Morris is retiring at the end of the season as head coach of St. Joseph's Preparatory School.

"I'm sad to leave, gonna miss it a lot. When you love something, it's hard to say goodbye, very tough," Morris said.

The 77-year-old doesn't want to walk away but his four-year battle with Parkinson's disease has taken its toll.

"It is a tough decision, can't do it anymore," Morris said, recalling a recent story about how he almost was run over on the sidelines this week because the kids are too fast.

Morris broke the news in an emotional meeting on Monday with the support of his close friend and former Temple coach Fran Dunphy ,as well as his best player from La Salle, Lionel Simmons, by his side.

St. Joe's Prep captain Trevor Wall said, "It was pretty emotional. Coach probably doesn't want me to say it, but he got a little emotional. He teared up a little bit."

Morris talked about his career and the impact he had on players and schools.

Fellow team captain Chris Arizin said, "He talked about his career and how much the Prep meant to him. It was really emotional, seeing all the people that he impacted."

The trophies and awards that filled his office at Prep where he has spent the last 18 years is a glimpse into his legendary career: over 1,000 career wins, 14 championships in high school and college, 11 Hall of Fame inductions.

"So many great memories," Morris said.

Of all the accomplishments, the Manayunk native is most proud of helping shape the lives of kids.

Best Winning % of any coach in school history