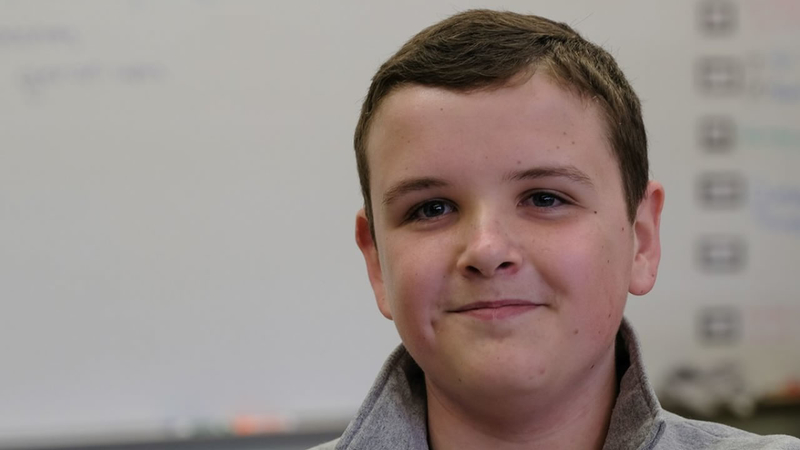 VALLEJO, Calif. -- A young teenager was caught on video helping an elderly man across the street during a hailstorm in Vallejo. He's gone viral but it hasn't gone to his head.

He's one of those kids the average person might never know about, if not for a random act of kindness.

Elvis Ingersoll goes to St. Dominic's School in Benicia. "I did not expect it to become like national news at all," he said.

A teenager performed an incredible act of kindness this past weekend during one of the hailstorms that struck the Bay Area.

"Elvis is very unassuming, there's not a lot of ego with Elvis," said his father, Ken Ingersoll. Ken owns Gracie's Restaurant in nearby Vallejo, where all of the family's kids take turns working.

If you have not seen the video, let's set the scene. Elvis was working on the restaurant, busing tables. Suddenly the sky opened up and hail fell down. Elvis looked outside and saw an elderly man trying to cross the street. He grabs an umbrella and protects a local man known as Herman, who doesn't move as fast as he used to.

"I wanted to help him because I knew that hail would hurt," he said.

Video captured a young teenager helping an elderly man across the street during a hailstorm in Vallejo. He's gone viral but It hasn't gone to his head.

Neither of them were aware of customers taking videos and pictures of the act of kindness. Thousands of people have seen them now on Facebook and YouTube.

"I would be more concerned if he just stood there and watched it happen and didn't do anything about it," Ken said.

When asked if he thinks he did anything remarkable, Elvis replied, "No, I don't think I did very much at all."

Nor would we want him to, which has given such needed faith to a world turning so tired of cruelty and cynicism. Now we know there's more to us than that, and all thanks to an unassuming 14-year-old.

This is what happens when an act of kindness goes viral. Elvis Ingersoll of #vallejo. #abc7now pic.twitter.com/eATqp55OZW

He’s the 8th grader who grabbed an umbrella to help an elderly man cross a street in a hailstorm. Vids went viral. pic.twitter.com/T3fct1B2ov