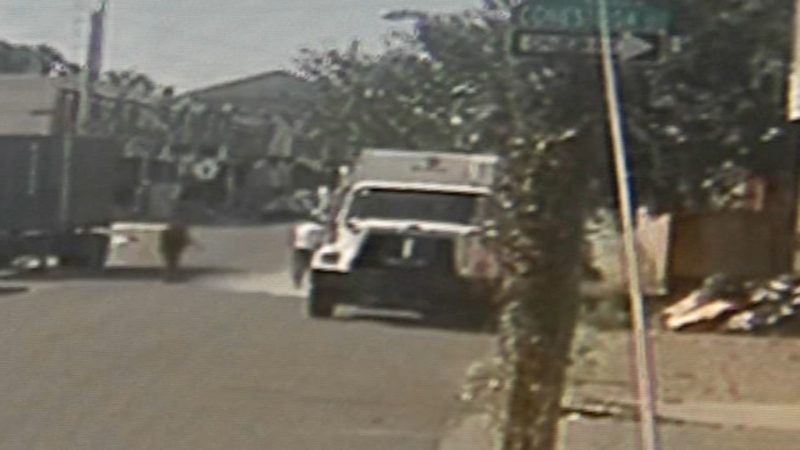 PHILADELPHIA (WPVI) -- Mayor Jim Kenney has a strong anti-dumping program with increased fines for offenders, and even a special unit to investigate illegal dumping.

So, it would seem particularly scandalous and deplorable that a crew with the City of Philadelphia was caught on surveillance tape illegally dumping demolition waste on a Southwest Philadelphia street.

A man, who wanted to remain anonymous, says the alleged incident happened on Thursday around 11:30 a.m.

In the video, you can see a city sanitation truck pull up to the 5400 block of Paschall Avenue. Then, two people, presumably city workers, get out of the truck and do the unthinkable.

You then see a big plume of dust clouds the area as they dump a pile of drywall, mortar and other demolition materials. The men then quickly jump back into the truck and drive off.

The tipster could not believe what he was seeing.

"I rewound it over and over to make sure it was what I was seeing. And yeah, it was clear it was our sanitation department," he said.

As the truck pulled off, the City of Philadelphia emblem can be seen on the driver's door.

And to add insult to injury, other illegal dumpers saw the pile and decided to add to it with their trash. Residents were outraged.

"I live here. This is my neighborhood, don't take your trash and bring it here. Why would the city dump here?" one neighbor said.

"If the city's doing this, it should be an embarrassment cause their job is to pick it up; why would you dump it there?" said Tony Sanders, who also lives nearby.

In a statement, the mayor's office said, "We take illegal dumping very seriously and are investigating the matter."

The city immediately sent crews out to clean up the mess.

"Whoever is responsible for this needs to be terminated," one neighbor said.

The city says it's still trying to determine if it was one of their trucks and who was using it at that time.