Police say they found more than 20 spent shell casings at the scene.
WPVI
By Katie Katro and 6abc Digital Staff 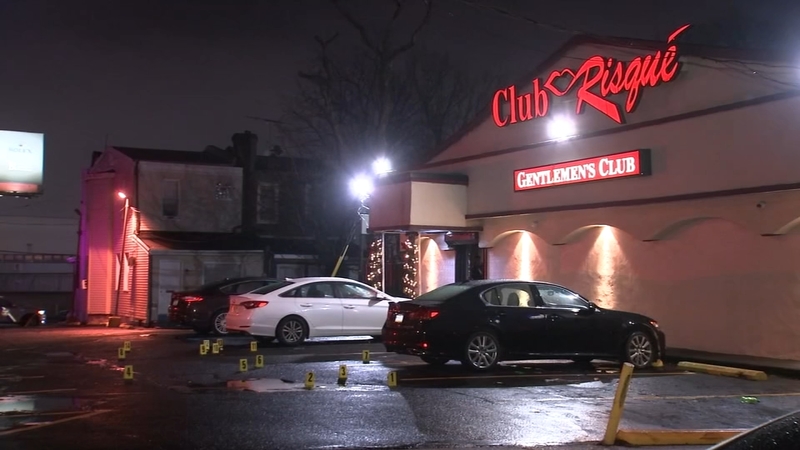 PHILADELPHIA (WPVI) -- An assault by a group of men on another man led to a deadly double shooting outside a gentlemen's club in Philadelphia, police say.

It happened around 2:15 a.m. Tuesday in the parking lot of Club Risque on the 5900 block of Tacony Street.

Police were then notified of a second shooting victim, a 42-year-old male, who had been taken by a private car to Jefferson Frankford Hospital. He was pronounced dead a short time later.

Investigators say a group of four males, including at least one of the victims, was standing outside the club when another man passed them.

Police say the passerby got into a verbal altercation with one of the shooting victims.

Following the verbal altercation, police say the group of males jumped the other man and assaulted him.

Police say a friend of the man was a short distance away and saw what was happening.

The man's friend pulled out a gun and shot at the group of males, police say.

After the shooting, police say the male gunman got into a dark Nissan and left. The man who had been jumped fled the scene on foot.

Police say they found approximately 22 spent shell casings at the scene, most of them right outside the entrance of the club. Seven shell casings were found around two cars parked in the lot.

A couple more spent shell casings were found in the street, where a loaded magazine for a semi-automatic handgun was also discovered.

No weapons were recovered and no arrests have been made.

Investigators were looking at video from inside and outside the club.