Responders say wearing a properly fitted life jacket can be the difference between life and death when on the water.
WPVI
By Trish Hartman 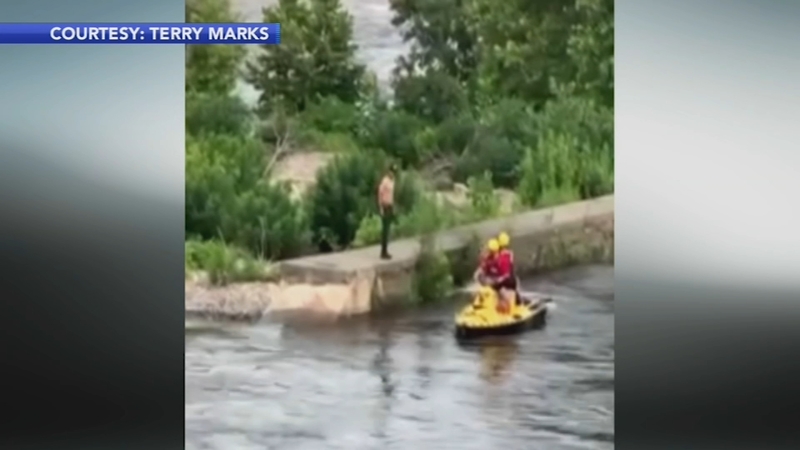 After recent rescues, responders urge caution on the Delaware River

LAMBERTVILLE, New Jersey (WPVI) -- Local rescue squads along the Delaware River are urging people to use caution when planning outings on the river after several recent rescues.

"What we've been seeing is a lot of swimmers and tubers generally not associated with the commercial companies that come out to enjoy the river, but they don't really know the river well enough to know if it's safe," said Keith McMillen, marine captain with New Hope Eagle Fire Company.

Every summer thousands of people enjoy time on the Delaware River, especially in the Lambertville/New Hope area.

On Monday, New Hope Eagle Fire Company made two rescues in one day. In one, captured on video by a neighbor, a boater ended up stuck in the area of the New Hope Wing Dam.

"We don't know if their engine died or what happened, but they got sucked down river and went thru the spillway. The one gentleman jumped and ended up on the spillway divider," said McMillen.

Two other boaters were rescued successfully downriver, but that's not always the case.


Earlier this month, officials say a Doylestown man died in the area of Bulls Island Recreation Area in the Delaware River, despite the efforts of responders.

McMillen says for a good indicator of how strong the current is, look at the color and clarity of the water.

"If you stand in the water about up to your knee and you can't see your feet crystal clear, then don't go in the river," said McMillen.

Local tubing and kayaking companies say they'll cancel trips if the river is too high. The owner of Big Bear Rentals in Lambertville says he'll communicate with other rental companies to make sure they're all making a safe decision.

"I like kayaking and tubing and pretty much anything on the water I love doing," said Erik Schmidt of South Brunswick, N.J.

"Even if you're an experienced swimmer there are people that get rescued all the time and horrible stuff happens when you get in the water and it's too high," he said.