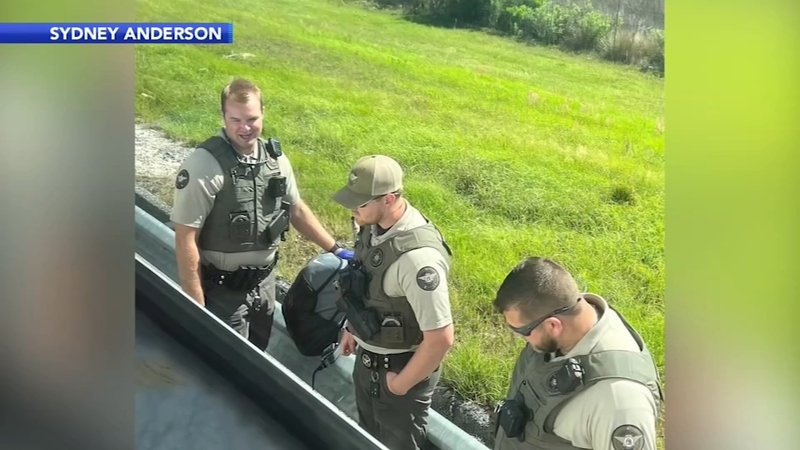 DOVER, Delaware (WPVI) -- It all started with a traffic stop.

On April 20, 2022, around 10:30 a.m., the Delaware State University women's lacrosse team began their long journey home when officers from the Liberty County Sheriff's Office pulled them over while driving through Georgia.

The officers allege the bus driver was incorrectly driving in the left lane and asked him to step off the bus.

"After that, they came on the bus and they told us they were going to be checking through our luggage," recalled sophomore lacrosse player Sydney Anderson. "They didn't ask us, they told us."

TRAFFIC STOP TURNS TO DRUG SEARCH: @DSUHornets Women’s Lacrosse team bus was pulled over in Georgia for improperly using left lane. Then officers searched all of the luggage under the bus and asked players to admit if they had drugs on board. Team alleges racial profiling @6abc pic.twitter.com/nEY5kQvwuA

And at that point, another player started filming when officers asked players to admit if there were drugs on board.

"If there is something there that is questionable, please tell me now," said one of the officers in the video. "Because if we find it, guess what? We're not going to be able to help you. In the state of Georgia, marijuana is still illegal."

Head coach Pamella Jenkins said almost everyone on board was African American and called the incident racial profiling.

"I definitely felt it by the accusatory tone of the police officer. And while talking about narcotics, he went straight to marijuana," said Jenkins.

In response to these allegations, Liberty County Sheriff William Bowman said he conducted an internal affairs investigation. He said his officers did everything by the book and also shared bodycam footage of the incident.

In the video, officers explain that while the bus was initially pulled over for a traffic stop, the officers had a right to bring out their K9s and conduct a clear air sniff, which alerted them to the luggage. Thus, prompting their search.

In an email, a representative from the sheriff's office clarified by saying, "This alert does not indicate there are drugs on the bus, just that the odor is present."

The officers did not find anything during the search.

"If we got pulled over for a traffic violation, there's no correlation between them checking our personal luggage and violation of traffic. So it made no sense so there was a clear indication of racism there," said Anderson.

Delaware State University President Dr. Tony Allen said in a statement, "Our student-athletes, coaches, and the subcontracted bus driver are all safe. I have spoken with many of them, and in the course of investigating this incident in conjunction with our General Counsel and Athletic Director, I have also reached out to Delaware's Governor, Congressional delegation, Attorney General, and Black Caucus. They, like me, are incensed. We have also reached out to Georgia Law Enforcement and are exploring options for recourse-legal and otherwise-available to our student-athletes, our coaches, and the University."
Report a correction or typo
Related topics:
delawaredelaware state universitysearchsheriffcollegeu.s. & worldtraffic stopsportsdrugsrace and culture 6abcrace and culture
Copyright © 2022 WPVI-TV. All Rights Reserved.
TRAFFIC STOP
NJ trooper won't face charges in Black motorist's 2020 death
DSU to take legal action after 'constitutionally dubious' bus search
DSU president says traffic stop footage contradicts sheriff
Police still searching for suspect who led officers on chase
TOP STORIES
AccuWeather: Severe Thunderstorms This Evening
Teen, officer and driver injured after police chase ends in crash
Texas woman sought in fatal shooting of pro cyclist: US Marshals
78,000 pounds of infant formula arrives in US
12 shot and 4 dead after string of shootings in Philadelphia
Fate of 2,500 Ukrainian POWs from steel plant stirs concern
Pennsylvania's Fetterman released from hospital after stroke
Show More
Some peanut butter recalled for potential salmonella
Biden pushes economic, security aims as he ends South Korea visit
South Jersey Army Navy shop sends uniforms to Ukraine
South Jersey man returning home after walking the world
Philadelphians find ways to stay cool amid scorching May weekend
More TOP STORIES News