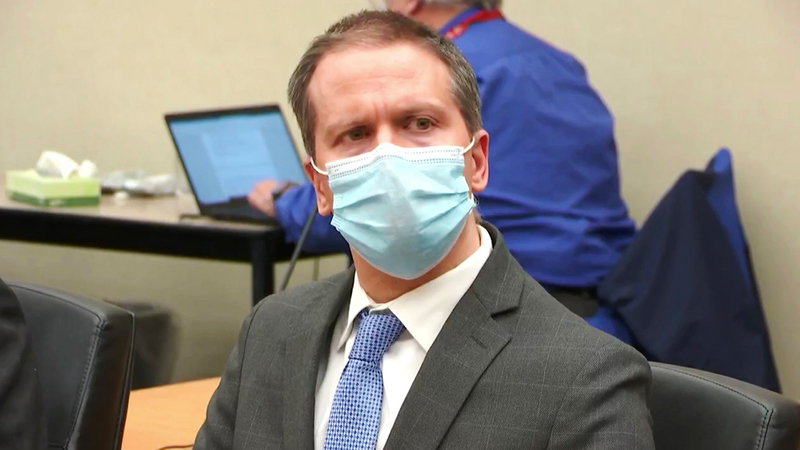 PHILADELPHIA (WPVI) -- The City of Philadelphia is reacting to an all-guilty verdict in the trial of Derek Chauvin, the former Minneapolis police officer who pressed his knee into George Floyd's neck, killing him.

The verdict, arrived after about 10 hours of deliberations over two days, was read late in the afternoon in a city on edge against the possibility of more unrest like what erupted last spring.

"I'm glad. He deserved it," said the owner of a Philadelphia business that was hit hard by the unrest this summer.

"Wherever you are in whatever manner aligns with your faith, please pray for Peace, Justice, Wisdom, and Unity," said the city in news release.

Community leaders and business owners in Philadelphia had a sense of relief Tuesday following the conviction of former Minneapolis Officer Derek Chauvin.

At a Target in the city's Wynnefield Heights section, shoppers were also happy about the news. The store was heavily damaged by looters during the unrest.

"It took long enough. There was a whole lot of unnecessary stuff that was going on about it... so hopefully, things can get right," said shopper David Thomas of Overbrook.

Inside a West Philadelphia barber shop, all eyes were trained on the verdict coverage.

"I feel like justice has been prevailed. It was bluntly murder and if it hadn't been for smart cameras and all the videos, that would have been the only way," said Bryant Jones of Major League Cuts.

Jones' co worker, Jamal Murphy, hopes this is a turning point for the country.

The community in West Philadelphia is reacting to the guilty verdict in the Derek Chauvin trial.

At the intersection of 52nd and Market streets, the business district of West Philadelphia, there's also relief of two kinds.

One is from a business standpoint.

"I'm satisfied with the verdict. I just don't want the looting to go on," said Dez Savage of The Light House Jamaican Restaurant.

But there's also relief of a personal sense for so many.

"He deserved it. You got footage, you got real video, real-time evidence. You got cops testifying against you," said resident Christina Clements.

"You know being a Black man coming from a Black family, it could have been one of us. I'm just happy that justice is served," said Michael Tillman of Parkside.

Action News was outside Philadelphia City Hall as people found out about Derek Chauvin conviction.

Philadelphia's local leaders have been preparing for any reaction to the verdict. Roughly 1,000 Pennsylvania National Guard members are currently in the city at the request of Mayor Kenney.

"The Philadelphia Police Department is prepared for any possible civil unrest that may unfold in the wake of the Chauvin verdict. As we have seen in the past, the overwhelming majority of people in our city demonstrate in a peaceful manner," said Police Commissioner Danielle Outlaw.

Floyd died last May after Chauvin, a 45-year-old now-fired white officer, pinned his knee on or close to the 46-year-old Black man's neck for about 9 1/2 minutes. Floyd gasped that he couldn't breathe and onlookers yelled at Chauvin to get off.

The jury was made up of six white people and six Black or multiracial people.

President Joe Biden spoke from the White House hours after the verdict alongside Vice President Kamala Harris, with the pair saying the country's work is far from finished with the verdict.

Biden and Harris called on Congress to act swiftly to address policing reform, including by approving a bill named for Floyd. Beyond that, the president said, the entire country must confront hatred to "change hearts and minds as well as laws and policies."

"'I can't breathe.' Those were George Floyd's last words," Biden said. "We can't let those words die with him. We have to keep hearing those words. We must not turn away. We can't turn away."

Harris, the first Black woman to serve as vice president, said racism was keeping the country from fulfilling its founding promise of "liberty and justice for all."

"It is not just a Black America problem or a people of color problem. it is a problem for every American," she said. "It is holding our nation back from reaching our full potential."