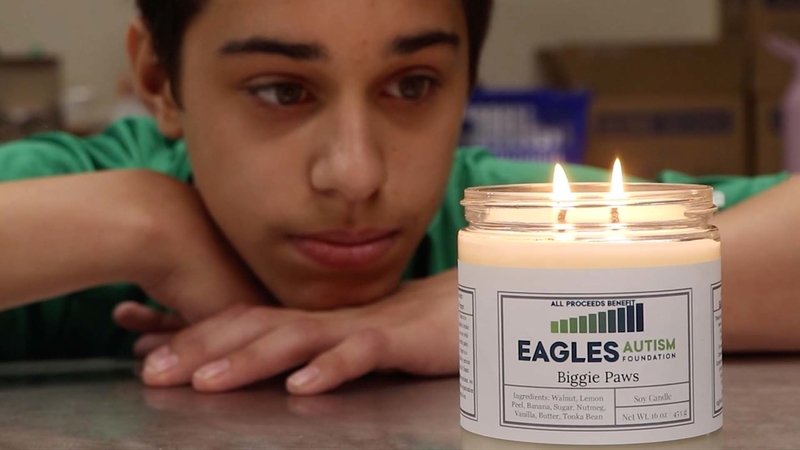 LANSDALE, Pennsylvania (WPVI) -- "When I was little, people said no, you can't do this, you can't do that. And that made me feel like I was second class," said Shane Popiny. "So, I decided to start this candle company to prevent disabled children from feeling the same way I felt."

Shane, 13, suffered a stroke as a newborn and was later diagnosed with both cerebral palsy and autism. But his disabilities don't hold a candle to his abilities.

He is not just the president of his 7th grade student council. Shane is also the founder of Shane and Pepper Candle Company, which was created last year with the help of his family.

"Ever since I was a kid, I've loved candles," he said. "And they've always calmed me down."

That was the inspiration for the Popiny family fundraiser in 2016 to purchase a service dog for Shane. That's how he was partnered with "Pepper" from a non-profit called 4 Paws for Ability.

"We're like, why don't we just make candles because we had to raise that money, right?" said Shane's mom, Marie. "So, we raised $17,000 to get Pepper. And it has been love ever since with the candles."

"The proceeds from these candles are being donated to help with research and kids with autism," said Marie.

The Eagles Autism Foundation is grateful for the support. Since its inception in 2018, it has already raised $15 million.

"The fact that they've created candles that are going to benefit the foundation, I just think it's another way that we've had these connections in the community bring us together with such special people," said Executive Director Ryan Hammond.

Later this year, Shane and Pepper Candle Company will open a new location in Lansdale and eventually seek to employ individuals with disabilities.

To learn more about Shane and Pepper Candle Company or the Eagles Autism Foundation, visit their websites.

At the 6th annual "Spike the Rock" Volleyball Tournament, high school students raised over $26,000 to pay the bills of families fighting cancer.