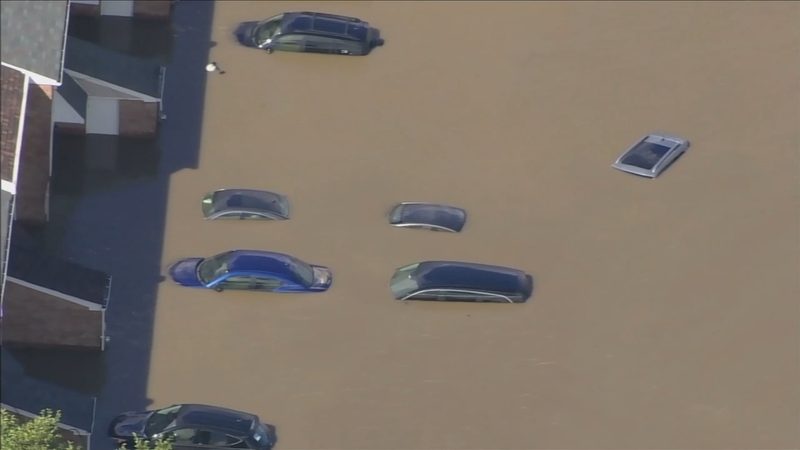 PHILADELPHIA (WPVI) -- Two weeks after the devastating flooding in the Eastwick section of Southwest Philadelphia, residents are still dealing with the aftermath.

"They come by once in a while to pick up the trash, but as you can see, it's still out here," said Shirley Barron as damaged furniture and other items lined the street outside.

She is among a number of residents who suffered heavy damage to their homes and property due to severe flooding from nearby Darby and Cobbs creeks caused by Tropical Storm Isaias.

"We're still in limbo, the basement is still torn up and now mold and mildew is beginning to come and we haven't heard anything yet," said Barron.

Latifa Walker also suffered heavy damage in her basement, losing much of her furniture. The drywall and flooring and their cars parked outside were flooded out. Some have little or no insurance to cover the losses.

"Hot water tank, furnace, central air, our whole basement was flooded out. We have to get rid of all our sheetrock in the basement and garage," said Walker.

"Philadelphia directly supplying that large amount of money in the middle of this pandemic and depression is going to be challenging for us to do," said Kenney.

Others wanted to know what is being done long-term to resolve the flooding problems once and for all after seeing study after study come and go.

The United States Army Corps of Engineers says they are in the middle of a three-year study in partnership with the city to address these problems once and for all.

"Would there be buyouts, relocations or acquisitions, would we do floodproofing, would we look at early warning systems, evacuation routes," said Joel Dohm with the Army Corps of Engineers.

"I wanna be engaged to make sure we are doing everything possible to help the people out there in Eastwick," said Councilman Johnson who represents the district.