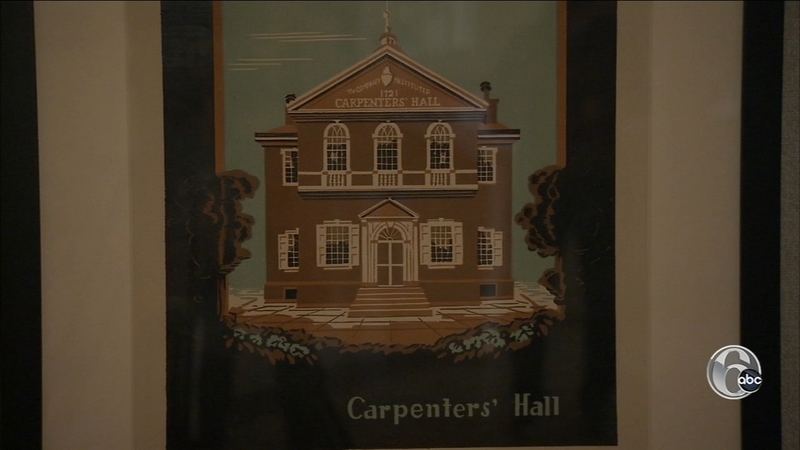 PHILADELPHIA (WPVI) -- Places for the People: WPA Travel Posters is a collection of works created by artists in the 1930s as part of President Franklin Delano Roosevelt's Works Progress Administration.

The federal agency funded infrastructure projects to help spur economic activity during the Great Depression, and as part of that, out-of-work artists from all over the country were hired to create tens of thousands of posters that would encourage people to travel.

In Philadelphia, posters were made to celebrate some of the city's most iconic historic landmarks from Independence Hall and The Betsy Ross House to the Shofuso Japanese House in Fairmount Park.

The posters are mostly from the print collection at the Free Library of Philadelphia and some of them have never been exhibited before.
You can also see a never-before-exhibited painting, depicting Carpenters Hall during the Continental Congress. It was also created by a WPA artist

Places for the People at Carpenters' Hall: WPA Travel Posters : Tickets
Through Dec. 20. Both Carpenter's Hall and the exhibition are free

320 Chestnut Street, Philadelphia, Pa. 19106
215-925-0167
At the Fabric Workshop and Museum, there's an immersive installation created by artist Samara Golden whose works are designed to transport viewers.

The title of the work is Upstairs at Steve's. It's a tribute to the artist's brother-in-law who passed away from complications of ALS.

The curator says it's for "curious people who are ready to have their minds expanded a little bit and really start to wonder and reflect about themselves and the state of the world."